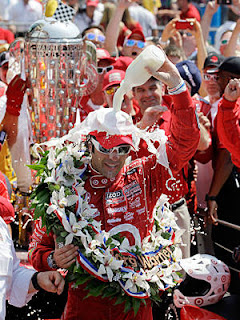 Dario Franchitti became the 10th driver to claim three or more Indianapolis 500 wins Sunday, outlasting a final-lap challenge from Takuma Sato that saw Sato crash heavily into the Turn One wall, then joining Helio Castroneves as three-time winners of the event.

In Victory Lane, an emotional Franchitti remembered his friend, 2011 race winner Dan Wheldon, who lost his life in the final race of last season. ''Everybody up there (at the front) was a friend of Dan's, and that about sums it up. Everybody loved him,'' said Franchitti. “Thanks to all of the Indianapolis fans for their tribute to Dan today. What a race. I think D-dub (Wheldon) would be proud of that one."

Indy Notes: Sunday’s win came in Franchitti’s ninth career Brickyard start, tying him with Louis Meyer, who also claimed his third 500 checkered flag in his ninth start. It was Meyer’s 10th Indianapolis 500 in all, however, since he drove as a relief driver in his rookie year.

…ABC struggled to maintain an unobstructed view of Franchitti as his car was pushed into Victory Lane, thanks to the winner’s wife, actress Ashley Judd. Displaying an uncanny ability to jump into every Victory Lane and post-race shot, Judd alternately proclaimed her husband an “incredible talent” and fought to maintain control of an oversized straw hat large enough to shade her, her husband and most of his race team. Judd was the first person interviewed after the checkered flag – even before team owner Chip Ganassi – but inexplicably continued stepping between Franchitti and the camera throughout the post-race ceremonies. Apparently, award-winning actresses do not, in fact, have an inherent feel for the camera.

...The National Weather Service reported a high temperature at Indianapolis of 91 degrees Sunday, making the 2012 running of The Greatest Spectacle in Racing the second-hottest on record. The hottest race ever occurred in 1937, when the mercury hit 92 degrees. Race day temps also hit 91 in 1919 and 1953.

…Former Indianpolis Motor Speedway Radio Network reporter Ron Carrell died Sunday. Carrell called the backstretch, first turn, third turn and pits from 1965-1992, and is remembered for his vivid description of Danny Sullivan's spin between Turns 1 and 2 that preceded his victory in the 1985 Indianapolis 500.

…Three women competed in Sunday’s Indianapolis 500; none of them named Danica Patrick. Brit Katherine Legge finished one lap down in 22nd place, with Brazilian Ana Beatriz 23rd, 10 laps in arrears. Swiss driver Simona DeSilvestro completed just 10 laps before being black-flagged from the event along with teammate Jean Alesi, both saddled with Lotus engines too slow to remain safely on track. None of the three women received even a small fraction of the attention heaped upon Patrick in prior seasons. In fact, Patrick was featured briefly in ABC’s pre-race coverage, with host Brent Musberger declaring that the GoDaddy Girl would not, in fact, take part in this year’s race.


…Food Network star Guy Fieri drove the 2013 Chevrolet Corvette ZR1 Pace Car during pace laps at Indy Sunday, with three-time race winner Johnny Rutherford handling Pace Car duties during the race itself. Asked what advice he received from Rutherford, the “Diners, Drive-Ins and Dives” host called his mentor, "the Obi-Wan Kenobi of pace car driving. He gave me as much as I think I could understand. I'm going to watch that rear-view mirror and side mirror and really know where (the race cars) are.
“There's a lot going on,” admitted Fieri. “I don't think people quite understand the responsibility. It's a real responsibility of prepping this thing, getting those drivers ready and letting 'em loose."
…Marco Andretti led a race-high 59 laps Sunday, the seventh time that a member of the Andretti family has led the most laps in an Indianapolis 500. Grandfather Mario Andretti led the most laps in 1969, 1985, 1987 and 1993, and father Michael turned the trick in 1991 and 1992. Only Mario’s 1969 effort resulted in a victory, and the Andretti Curse continued Sunday with Marco crashing out of contention with just 12 laps remaining.
…Sunday’s race featured a record 34 lead changes. The previous record was 29, set in 1960. It also had 10 different lap leaders, tying the 1980, 1995, 1998 and 2011 races for the second-highest number of leaders. The record is 12, set in 1993.
…Franchitti has now crossed the finish line under caution in all three of his Brickyard wins, due either to crashes (twice) or rain.
Photo Credits: FOX Sports, Tom Strattman/AP, Zimbio.com, Yahoo Sports