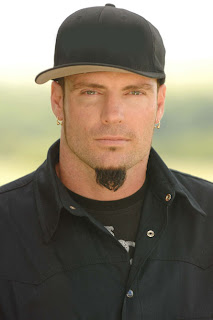 Vanilla Ice will serve as Honorary Pace Car Driver for the June 10th Pocono 400 NASCAR Sprint Cup Series race at Pocono Raceway. Vanilla Ice, whose 1991 hit, "Ice Ice Baby" was the first rap single to reach No. 1 on the Billboard Hot 100 charts, stars in the upcoming Sony Pictures release, That’s My Boy, which hits theaters nationwide next month.
Before assuming his driving duties in the 2012 Camaro SS ‘Official Pace Car’, Vanilla Ice will make an appearance at The Tricky Triangle Club, tour the team haulers and attend the driver’s meeting prior to the race. He will also do a pre-race parade lap in the Mustang 5.0 he drove in the movie with lucky race fans, who can bid on the ride through Thursday, June 7 as part of an online auction component of the inaugural Pocono Celebrity Charity Poker Showdown. The tournament, which takes place at Mohegan Sun at Pocono Downs on Thursday, June 7, benefits The NASCAR Foundation and The Armed Forces Foundation and will feature race fans playing alongside NASCAR drivers and celebrities. For more information on the poker tournament or to bid on the ride with Vanilla Ice, visit NASCAR.COM/Unites.
That’s My Boy, also starring Adam Sandler and Andy Samberg, is scheduled for a June 15th release. The film is directed by Sean Anders, produced by Adam Sandler, Jack Giarraputo, Heather Parry and Allen Covert, and written by David Caspe.. For additional movie information, visit www.thatsmyboy-movie.com.
Posted by Dave Moody at 2:34 PM