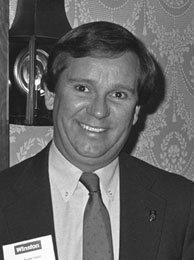 
Robertson was 48 at the time of his death in a boating accident, when he held the dual roles of senior vice president at R.J. Reynolds and president of the company’s Sports Marketing Enterprises (SME) division which managed sponsorships in NASCAR, the NHRA, Senior PGA Tour and other entities. He had a distinguished 27-year career in sports marketing, the last 14 heading SME.


Robertson followed the legendary Ralph Seagraves as Reynolds’ point man with NASCAR. Among his many accomplishments was overseeing the creation of what is now known as the NASCAR Sprint All-Star Race – originally called The Winston.


The foundation of his marketing approach was simple – and effective. Robertson was all about partnerships and the resulting relationship that enabled all partners to benefit.


Robertson joined the R.J. Reynolds organization in 1971 as an administrative trainee and show car driver. A native of Winston-Salem, N.C., Robertson earned an associate degree from Rowan Technical Institute.

This is the latest in a series of GodfatherMotorsports.com biographies profiling the 25 nominees for the 2012 class of the NASCAR Hall Of Fame. Each of the 25 candidates will be profiled in the coming weeks, in alphabetical order.
Posted by Dave Moody at 1:57 PM