Tony Stewart was in rare form Sunday night, delivering a scathing, tongue-in-cheek assessment of the NASCAR Sprint Cup Series Aaron’s 499 at Talladega Superspeedway. The three-time defending NASCAR Sprint Cup Series champion met with the media minutes after seeing his hopes for victory dashed by a late-race crash, making it clear that he is no fan of the style of racing  that resulted in his 24th-place finish.

"We didn't quite crash half the field which is what we normally look to do here,” quipped Stewart. “I was excited about it. I thought it was a pretty good race. I made it further than I thought I would before I got crashed. I call it a successful day." 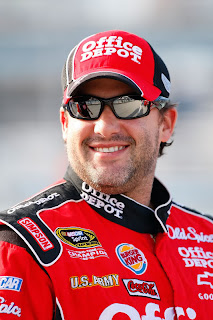 "I'm upset that we didn't crash more. I feel like that is what we are here for." -- Tony Stewart
He criticized recent NASCAR rule changes that limited the size of radiator openings and caused a number of overheating issues on a 90-degree Talladega Sunday, saying, “It's fun to be able to race and have to watch the gauges at the same time. It makes us drivers have to do so much more. Being able to make yourself run on the apron and everything else to try to get clean air, it makes it fun. I'm sorry we couldn't crash more cars today. We didn't fill the quota for today for Talladega and NASCAR."﻿﻿
Asked if NASCAR should reverse field and allow wider grille openings, Stewart again opted to take the sarcastic route, saying, “I think they need to close it down. (And) if we haven't crashed at least 50 percent of the field by the end of the race, we need to extend the race until we at least crash 50 percent of the cars. It's not fair to these fans… not see any more wrecks than that, and more torn up cars. We still had over half the cars running at the end and it shouldn't be that way.
“I think we ought to just tape (the cars) off solid and run them until they blow up,” said Stewart. “I think it would make it a lot more exciting for the fans."
He also bemoaned the cost of repairing crashed race cars, saying, “I feel bad if I don't spend at least $150,000 on torn up race cars going back to the shop. We definitely have to do a better job with that. I'm upset that we didn't crash more. I feel like that is what we are here for."
The Stewart Haas Racing driver also suggested changes to the Talladega Superspeedway, quipping, “If we could make it a Figure Eight, it would be perfect. It would absolutely be perfect… better than what we have. My vote next week is that we make it a Figure Eight, and/or we can stop at the half way (point), make a break and turn around and go backwards the rest of the way. Then, with 10 laps to go, we split the field in half. Half go the regular direction and half of them go backwards."
Posted by Dave Moody at 10:04 AM