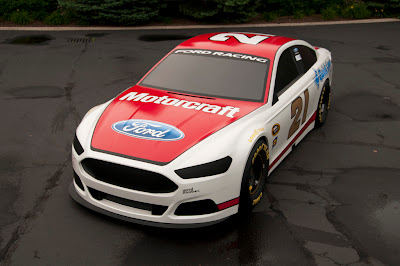 After unveiling the 2013 NASCAR Fusion at Charlotte Motor Speedway in January, Ford Racing is using the annual Memorial Day Weekend race at the track to highlight the first version of its new car in a team paint scheme. Fans will be able to get their first look at the 2013 Motorcraft Ford Fusion of the Wood Brothers this week, beginning on Thursday at the annual Roush Fenway Fan Day in Concord, NC. After that, the car will be located in the Ford Consumer Display at CMS this weekend, and is scheduled to be a regular part of the traveling exhibit throughout the remainder of the 2012 season.

The famed No. 21 Fusion is outfitted in its traditional Motorcraft paint scheme and is courtesy of the Ford Design Studio, which played a major role in the exterior look of the car. What makes it unique is the detail of the character lines and how it proportionally mirrors the 2013 production Fusion.

Take a very close look, though. Do you notice anything different about this car?
While it looks like an actual stock car; all buffed and ready to go 600 miles in the Coca-Cola 600 this weekend, it’s actually a full-sized clay model that was produced by the Design Center in Dearborn.
Posted by Dave Moody at 4:20 PM