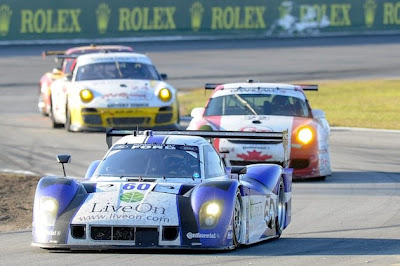 The 2012 racing season has just begun, and it’s already been a good one for AJ Allmendinger.

Allmendinger drove nearly three hours without relief in the race’s final stint, fending off repeated advances from pole sitter Ryan Dalziel’s No.8 Starworks Motorsport Ford and Ganassi Racing's defending champion No. 01 with Scott Pruett aboard to claim the upset victory in America’s premier endurance event. Dalziel finished 5.8 seconds back in second, with Shank's No. 6 Ford in third. The No. 01 Ganassi team fell from contention in the final two hours of the twice-round-the-clock event after experiencing a gearbox failure. Ford claimed all three podium positions in the headline Daytona Prototype class.

Allmendinger and teammates Justin Wilson, Oswaldo Negri and John Pew drove a nearly flawless race, setting a new Rolex 24 record with 761 total laps complete. The team’s best previous finish in the event came in 2006, when Allmendinger, Wilson, Negri and Mark Patterson claimed a runner-up finish. The triumph marked Allmendinger’s first trip to Victory Lane since he won the non-point NASCAR Sprint Showdown at Charlotte Motor Speedway in 2008. He won five races in the now-defunct Champ Car World Series in 2006 before jumping to NASCAR.

“I’m worn out,” admitted Allmendinger in a chaotic Victory Lane. “We wanted to win this for Shank. I’m drained. I knew those last three hours I was going to have to go flat out. When Dalziel got in the car… I knew I was going to have to drive my ass off.  I pushed really hard to build up a gap, then took the last 10 laps to manage that gap.”

Magnus Racing topped the GT standings, led by former NASCAR Sprint Cup Series driver Andy Lally. It was the team’s first Rolex 24 win and Lally's fourth. “I knew we had the potential to do it,” said Lally, NASCAR’s 2011 Sprint Cup Series Rookie of the Year. “It was absolutely epic to come home on the top step (of the podium), especially in the 50th.”
Posted by Dave Moody at 6:09 PM