Sergio Pena announced today that he will drive the No. 1 Toyota Camry for Hattori Racing Enterprises on the 2012 NASCAR K&N Pro Series East. 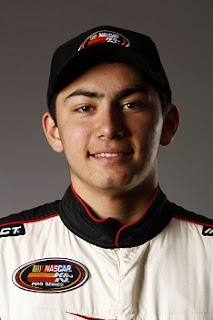 The 18-year old Winchester, VA native will enter his third season on the K&N Pro Series East, after previously being part of NASCAR's Drive For Diversity program with Revolution Racing. The highlight of his career to date came in his NASCAR debut, when he beat Sprint Cup driver Joey Logano for the pole and finished second in the 2010 Toyota All-Star Showdown at Irwindale (CA) Speedway; his first time in a K&N Pro Series car. Last season, he scored three wins and seven Top-10 finishes in 12 series starts, finishing fifth in the championship point standings.

“I am so excited for this opportunity,” said Pena, a freshman at Radford University. “I couldn’t be more thankful to Shige and the best group of guys behind me such as Matt Goslant and Andy Santerre. We all work together very well and with them behind me, I know we will definitely be one of the teams to beat this year.”

Hattori Racing Enterprises was formed in 2005, but will compete full-time on a NASCAR touring series for the first time this season. Owner Shigeaki Hattori is a championship-winning former racer, who earned the Formula Toyota title in 1994 before competing in the Indy Racing League’s Indy Light and IndyCar Series. He also drove a number of races in the NASCAR Craftsman Truck Series.

Born in Okayama, Japan, Hattori currently resides in Cornelius, NC, and said, "People are the key to the organization’s success. If you hire the right people with knowledge and experience, success will follow.” Four-time K&N Pro Series East Champion Andy Santerre will manage the operation, along with former West Series champion crew chief Matt Goslant, who led Pena's effort a year ago.

“I am excited to be working with Sergio again this season,” said Goslant, a Northfield, VT native. "He has the talent to be a champion and we are a good team together. We communicate well and he trusts me to put the car under him. He gives me 100%, and I could not ask for anything more in a driver.”

HRE is located in a state-of-the-art building owned by Germain Racing in Mooresville, NC and was designed by Hattori so he could continue to enjoy American stock car racing while developing young, talented drivers.
Posted by Dave Moody at 1:03 PM