Within the span of one week, Regan Smith drove his No. 78 Furniture Row Racing Chevrolet on the high banks of Daytona International Speedway and also on the ski slopes of Telluride, Colo. 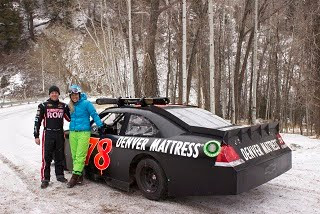 Why was the 28-year-old Smith, dressed in his Furniture Row firesuit, driving a NASCAR Sprint Cup Series race car at 9,000 feet above sea level on icy, snow-packed roads? It had nothing to do with last week's test session in preparation for the season-opening Daytona 500. Instead, the Telluride outing was designed to create footage for Warren Miller Entertainment's annual ski movie. The Telluride shoot was one of a number of locations around the world that will be utilized for the 2012 ski classic, which is scheduled for an October premiere.

Riding along with Smith in the race car, which was equipped with a ski rack and studded snow tires, was national and world tour freeskiing champion Jess McMillan.
"It's an interesting story why I was driving with Jess McMillan up a mountain," said Smith this week. "I can't say more about it until the movie is released. The conditions were tricky and the car was a handful to drive at times. It was a blast, but I did have my moments. Let's just say that the car didn't leave Telluride dent free."

McMillan, who has had her share of excitement in a success-filled freeskiing career, experienced a new thrill as a passenger in the Furniture Row Chevrolet. "There is nothing like riding in a race car," she said. "When Regan started his engine, my heart rate skyrocketed. I had a blast working with Regan and the Furniture Row team. It was an experience I will never forget. Car 78 looked so cool with a ski rack on its roof driving through snow-covered mountain passes. I can't wait to go to my first race."
Posted by Dave Moody at 11:42 AM