Martin To Nationwide For JGR In Las Vegas 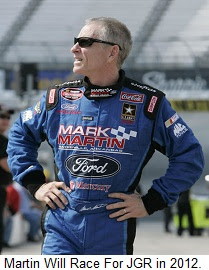 “We’ve always hoped to have the opportunity for Mark to drive for us, and to have him behind the wheel of our Interstate Batteries Toyota for the Nationwide race in Vegas is exciting,” said J.D. Gibbs, president of Joe Gibbs Racing. “He is a great example to all drivers of the dedication it takes to be successful and certainly we’re honored to have him part of our efforts in 2012.”

While Martin is only currently scheduled to race in Las Vegas for JGR, the team is still working on opportunities for the veteran driver to secure additional races.
He currently has 49 career victories in 235 Nationwide Series starts, with 111 top-five and 151 top-ten finishes. His most recent series victory came last season when he piloted the No. 32 car to Victory Lane, ironically at LVMS. He made four Nationwide starts in 2011, with the one win and three Top-10 finishes.

“This is exciting,” said Martin. “No organization has been better in the Nationwide Series over the past three or four seasons and to have the chance to get behind the wheel of a Joe Gibbs Racing Nationwide car will be a thrill. Maybe I can pick up a few more races and try to catch Kyle to get my record back again.”
Posted by Dave Moody at 4:29 PM