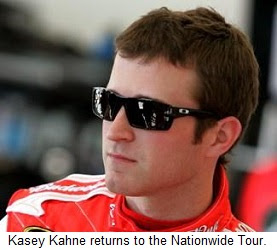 Turner Motorsports and Great Clips announced today that Kasey Kahne will compete in 15 NASCAR Nationwide Series events this season, driving the team's No. 38 Great Clips Chevrolet. Up and coming driver Brad Sweet, who has competed on a limited basis in the NASCAR Camping World Truck Series for the last two years and in the USAC Sprint Car Series and World of Outlaws Series for Kasey Kahne Racing in each of the last four seasons, will run for the Nationwide Rookie of the Year title in the balance of the 33-race schedule when Kahne is not behind the wheel.

Kahne began his NNS career wheeling the No. 38 car with Great Clips as sponsor. Together,they captured Kahne's first career series victory at Homestead-Miami Speedway in 2003. In 2005, Kahne captured his second career win at Texas Motor Speedway before stepping out of the ride on his way to the Sprint Cup ranks. In 2010, Kahne returned to the Nationwide Series on a limited basis at the helm of the No. 38 machine, once again carrying the banner for his longtime sponsor. Kahne piloted the car for eight races in both 2010 and 2011, racking up four Top-5 and six Top-10 finishes. 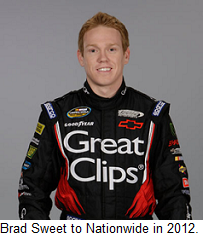 Kahne said he is looking forward to another season representing the Minneapolis-based company, adding, "I have had a long-standing relationship with Great Clips and it's been great teaming up with them again. They gave me my first real shot in this sport and that is something I have never forgotten."

Following in the footsteps of his mentor, Sweet made a name for himself in Open Wheel racing. After being tapped to drive for Kasey Kahne Racing in 2008, Sweet became a superstar in his own right with USAC victories in the Belleville Midget Nationals, Knoxville Midget Nationals and both the Sprint Car and Midget "Four Crown Nationals" at Eldora Speedway. He will make his Nationwide debut in 2012 with Turner Motorsports. He is no stranger to the Great Clips Racing family, having made 18 NASCAR Camping World Truck Series starts and one career Nationwide start under their banner in the last three seasons.

Sweet said he is ready to jump into this next phase of his career with Great Clips, Turner Motorsports and Kahne. "I can't begin to say how excited and grateful I am for this opportunity to compete in the Nationwide Series and join Kasey in representing Great Clips both on and off the track," he said. "Turner Motorsports is a first class organization with equipment capable of contending for wins week in and week out. I don't think I could be in a better position to take the next step in my racing career."
Posted by Dave Moody at 3:40 PM