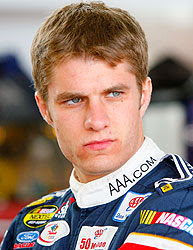 Ragan will drive FRM's No. 34 Ford this season, with David Gilliland wheeling the team's No. 38 Ford. A media release issued by the team makes no mention of driver Travis Kvapil, who drove the No. 38 Long John Silver's Ford last season.

Ragan joins Front Row Motorsports after a 2011 season that included his first career NASCAR Sprint Cup Series win in the Coke Zero 400 at Daytona International Speedway in July. He also earned two poles, four Top-5 and eight Top-10 finishes.
His new No. 34 Ford is a guaranteed starter for the first five races of 2012, after finishing 31st in owner points last season.

Gilliland returns for his third season with Front Row Motorsports, and will also be locked into the first five races of 2012, including the season-opening Daytona 500, where he finished third a year ago.

The team said sponsorship for both Front Row Motorsports entries is being finalized, and will be announced soon.
Posted by Dave Moody at 10:15 AM