While officially retired from racing, former NASCAR, IndyCar, Champ Car and Grand Am star Patrick Carpentier says he could return to compete in this year’s NASCAR Nationwide Series NAPA Auto Parts 200 in Montreal. 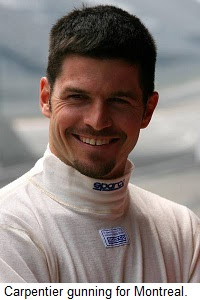 Carpenter hopes to return to Circuit Gilles Villeneuve, where he made his inaugural NASCAR start in 2007, winning the pole and finishing a close second to winner Kevin Harvick. He finished second to countryman Ron Fellows the following season, before accepting an offer to drive for Gillett Evernham Motorsports on the 2008 NASCAR Sprint Cup Series. The highlight of his Cup campaign came when he claimed the pole position at New Hampshire Motor Speedway, but Top-20 finishes were few and far between.

Since announcing his retirement from motorsports late last season, Carpentier has worked in real estate and construction near his adopted home of Las Vegas; purchasing houses, refurbishing them and “flipping” them for profit. He is also considering an offer to host an automotive television series in his native Quebec, and told Canada’s Globe and Mail newspaper that he hopes to return for a one-off appearance at Circuit Gilles Villeneuve in August.

“Montreal would be the only race I would do,” said Carpentier, “and I would give most of the money to children’s charities. If the TV show works out, it will be part of that, too. And it looks like it is going to happen, so I will probably race in Montreal.”
Posted by Dave Moody at 10:55 AM