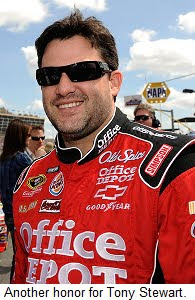 Tony Stewart put together one of the most exciting NASCAR Sprint Cup seasons in recent history, riding a late wave of success to win his third series championship.
Not only did he top the Sprint Cup championship race, but he has also been named the winner of the NMPA Richard Petty Driver of the Year award.

It’s the third time the membership of the National Motorsports Press Association has voted Stewart as the winner of the award, which has been presented annually since 1969. The announcement was made Sunday during the NMPA’s annual convention in Charlotte, N.C.

“It’s an honor to have earned the 2011 NMPA Richard Petty Driver of the Year award,” Stewart said. “Everyone at Stewart-Haas Racing took the opportunity we had of being in the Chase and made the most of it. We took each race one at a time and never quit. It made all the difference. This award is as much theirs as it is mine.”

During the 2011 season, Stewart earned a series-leading five wins, all during the Chase for the Sprint Cup. He posted 19 top-10 finishes, nine of them top fives.

Determined by vote of the membership, the Richard Petty Driver of the Year award has been presented annually since 1969 to recognize the season’s most outstanding driver. It is named in honor of NASCAR’s all-time leader in Cup victories.