Carmichael: "Rug Pulled Out From Under" In KBM/Monster Energy Deal

Multi-time AMA motocross and supercross champion-turned NASCAR driver Ricky Carmichael says he is uncertain of his plans for 2012, after sponsor Monster Energy elected to back brothers Kyle and Kurt Busch in a new NASCAR Nationwide Series effort. 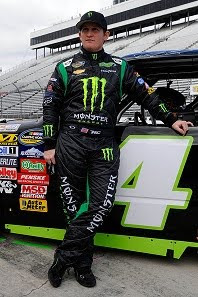 In an exclusive interview on SiriusXM NASCAR Radio’s SiriusXM Speedway with Dave Moody, Carmichael said he initially was assured the Monster Energy sponsorship would remain with him in 2012, and that the 20 NASCAR Nationwide Series races announced yesterday for Kurt Busch would be his.

“I had a handshake with the CEO of Monster Energy,” revealed Carmichael. “But the weekend of Texas (Motor Speedway), it went away. We were good to go, but when Kyle had his issue (at Texas), it all went sideways.” Carmichael said he believes his shot at retaining the Monster Energy sponsorship disappeared for good when Kurt Busch parted company with Penske Racing after the conclusion of the 2011 campaign.

“Kyle sent (Monster) a letter asking if they were interested (in joining KBM),” he said. “When they got that letter, it put a bug in their ear.” He said he was initially supposed to be a part of those plans, but eventually learned he was just one of many drivers under consideration. “I think Kyle talked to eight different drivers, counting me,” he said. “Unfortunately, I didn’t know that. I let Turner Motorsports know we probably wouldn’t be coming back (in 2012), but once Texas happened, things changed. I think I stayed in the mix (with KBM) only because of Monster. I don’t think I ever had Kyle’s approval. He was looking at seven or eight other guys. It’s not like he was texting me every day saying, `I really want you to race for me.'”

Gradually, Carmichael said he realized KBM was not the right place for him.

“It wasn’t right,” he said. “It felt forced, but I felt it was disrespectful to Monster (to turn the deal down). I just go about racing a different way (than they do). KBM doesn’t represent what I represent; the Ricky Carmichael brand.”

Carmichael said he feared his image would suffer from signing with Busch, adding, “I had a feeling that if I went there, I would lose fans. I was afraid people would say, `I used to like Ricky Carmichael, but now I don’t because he races for Kyle.’ I felt it wasn’t right for me. I need everything to be positive, and nothing negative. 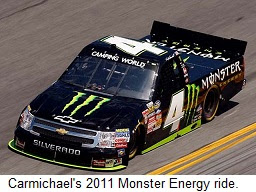 “I have no disrespect for Kyle Busch,” insisted Carmichael. “He’s a heck of a driver and he’s going to win a lot of races. I haven’t really come close to winning in NASCAR, so I’ve got no leg to stand on. I can’t complain about the decision. (Kyle and I) just have a different way of racing.”

Carmichael said he maintains a friendly relationship with Monster Energy, and could continue with them in some capacity this season. “I have no issues with Monster whatsoever,” he said. “I’ll be a part of their family forever. I feel like I played a huge (role) in bringing Monster to NASCAR in the first place. They gave me the money and said, `Go find your best NASCAR deal.’ We won two or three Supercross titles together, and two or three outdoor championships. They gave me some awesome opportunities over the years. I have nothing bad to say about them, they’ve been behind me 100% and always will be.”

The former supercross champion said that while he is trying to assemble a limited schedule of NASCAR racing for this season, his involvement will be “somewhat limited. It’s tough when you get the rug pulled out from under you in late December,” he said. “There’s not much to fall back on. It’s going to take some time to get things nailed down again, but hopefully, we can come back in 2013 and do it right.

“Things happen for a reason,” said Carmichael. “Hopefully, this will open up some other avenues for me.”
Posted by Dave Moody at 4:39 PM