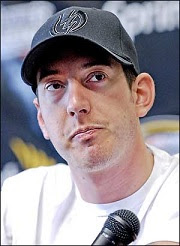 Kyle Busch has often been a lightning rod for controversy during his 11-year NASCAR career; never more so than at the end of the 2011 campaign. A crash with championship contender Ron Hornaday, Jr. under caution at Texas Motor Speedway on Nov. 4 resulted in him being “parked” by NASCAR from the weekend’s Nationwide and Sprint Cup events. Sponsor M&Ms elected not to take part in the Sprint Cup season finale at Homestead Miami Speedway, and Busch feared he would lose his job over the incident.

"If you keep getting in trouble, you're not going to be here very long,” said the Joe Gibbs Racing driver during yesterday’s opening day of the annual NASCAR Sprint Media Tour. “I'm trying to change something."

That will be unwelcome news to many of Busch’s most ardent fans, who embrace their driver as much for his renegade persona as his indisputable skills behind the wheel of a race car. They worry that toning down Busch’s off-track demeanor will impact his race day brilliance, turning one of NASCAR’s most polarizing personalities into just another corporate yes-man, smiling at the cameras and thanking God, Goodyear and Gatorade for a seventh-place finish and a good points day.

“I've got fans that tell me all the time they don't want to see me change," admitted Busch yesterday. "I've tried to keep that, but ultimately, it's not going to work."

No matter how he tries, however, Busch cannot seem to avoid controversy. He was back on the hot seat again yesterday, when reporters asked about his new NASCAR Nationwide Series team. Busch confirmed recently that he will not race on the Camping World Truck Series this season; a change made at the request of JGR. He will, however, split a season of Nationwide Series competition with elder brother Kurt, driving a Monster Energy-sponsored Toyota out of his own Kyle Busch Motorsports stable. While that partnership was approved in advance by JGR President J.D. Gibbs, team owner Joe Gibbs pulled no punches in expressing his unhappiness with the arrangement.

"I will say that I was not in that meeting, or we would not be doing this," said Gibbs. "These two (Busch and J.D. Gibbs) got together and somehow, we are now racing against him."

No matter how hard he tries to toe the line, Kyle Busch just can’t catch a break.
Posted by Dave Moody at 12:11 PM