Johanna Long will graduate to the NASCAR Nationwide Series in 2012, driving the #70 ML Motorsports Biomet/Foretravel Motorcoach Chevrolet Impala in both 2012 and 2013. 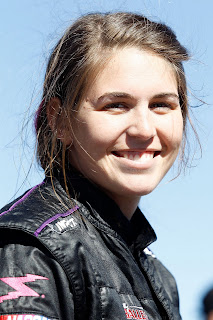 Long made 17 starts on the NASCAR Camping World Truck Series last season for her family owned Panhandle Motorsports team, with a best finish of 11th at Texas Motor Speedway in June. The second-generation driver -– daughter of former All-Pro Series driver Donald Long -– has progressed from go-karts through Legends cars and Late Models to NASCAR, becoming the first female track champion in the history of Florida’s Five Flags Speedway at age 15 and winning the prestigious Snowball Derby in 2010 before turning her attention to the Truck Series.

“Johanna is a strong driver and a dynamic young lady, and we are excited to have her on board”, said Miller. “She has a great competitive spirit; we believe she has everything it takes to succeed at the highest levels of NASCAR competition."