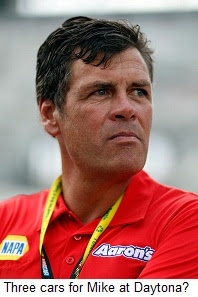 A spokesperson for the team declined to comment on the story today, but multiple sources say Michael Waltrip Racing and Red Bull are close to an agreement on the sale, awaiting NASCAR approval for an owner point swap that would allow MWR to field a third Toyota Camry in the 2012 Daytona 500.

MWR finished 18th and 28th in Sprint Cup owner points with drivers Martin Truex, Jr. and David Reutimann last season, and holds two guaranteed starting spots for the upcoming Daytona 500. MWR is expected to field three cars in the Great American Race for Truex, Clint Bowyer and Mark Martin, using one of the guaranteed starting spots held by Red Bull Racing. Those points would transfer to MWR in the event of a sale. Michael Waltrip could also compete in the 2012 Daytona 500, but is believed unlikely to do so in an MWR Toyota.

Sources say MWR is also interested in acquiring cars and equipment from Red Bull, including fabrication equipment and a shaker rig. If included in the sale, the former Red Bull Racing building would likely be used by MWR co-owner Rob Kauffman to house his RK Motors muscle car restoration and performance company, as well as his personal collection of classic and vintage automobiles.

Red Bull Racing closed its doors last month, after failing to find a buyer to continue operations.
Posted by Dave Moody at 11:32 AM