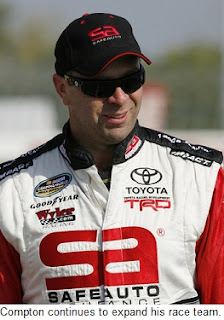 Turn One Racing announced today that it will field a NASCAR Sprint Cup Series car in 2012, starting with the Subway Fresh Fit 500 at Phoenix International Raceway on Sunday, March 4th. The team is building on the experience earned over the last three years of competition in the NASCAR Camping World Truck Series, where the team earned a ninth-place finish in the 2011 championship standings with driver Cole Whitt.

“This is a great opportunity for Turn One Racing,” said team owner Stacy Compton. “It has always been our objective to grow the team and this is the next step in that plan. We have a great group of partners behind us and I feel like we are taking all the right steps to build a very competitive Sprint Cup team.”

Compton’s team has purchased cars from Richard Childress Racing and plans are in the works to race 8-10 events in their freshman year. The team will not attempt to compete in the season-opening Daytona 500, beginning instead at Phoenix and continuing each week thereafter. “We have partnered with one of our long-time supporters to run a handful of races this year," he said. "We’re also working on additional sponsorship that would enable us to run more races throughout the year.”

The team is also in the process of putting together a full-season program for the No. 60 NASCAR Camping World Truck, with drivers, crew chiefs and sponsors for both teams to be announced at a later date.

Compton founded Turn One Racing in 2006 to develop and promote young drivers of exceptional talent in the late model divisions across the Southeast. In 2009, the team expanded its involvement by purchasing the highly successful Wyler Racing NASCAR Camping World Car Series team, which had claimed three wins, 20 top-five, and 35 top-10 finishes in 90 starts. Since rebranding as Turn One Racing, the team has captured two pole positions, two additional top-five and 14 top-10 finishes in 47 starts. The company is based in China Grove, North Carolina.
Posted by Dave Moody at 12:14 PM