Danica Patrick solidified her commitment to being a full-time NASCAR driver this season, announcing that she will bypass the 2012 Indianapolis 500 in favor of the NASCAR Sprint Cup Series Coca-Cola 600 at Charlotte Motor Speedway. 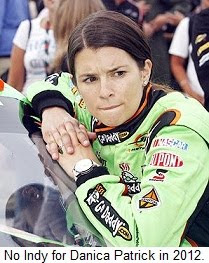 Speaking during the Opening Day of NASCAR’s annual Preseason NASCAR Sprint Media Tour, Patrick confirmed that the Coca-Cola 600 will be included in her limited, 10-race schedule of Sprint Cup starts with Stewart Haas Racing this season. She will also make a full championship effort on the NASCAR Nationwide Series, driving the No. 7 GoDaddy.com Chevrolet for JR Motorsports. In order to run the Coke 600 at Charlotte, Patrick will not compete in the IZOD IndyCar Series’ showcase event the same day. She has recorded six Top-10 finishes in seven career Indianapolis 500 starts, including a career-best third in 2009 for Andretti Green Racing.

Stewart said the decision to skip Indy was Patrick’s alone, adding, “We didn't tell her she couldn't run the 500." Stewart hailed the decision as a sign of her commitment to NASCAR and her new career in stock cars.

While admitting that Top-20 finishes are a reasonable expectation for her first part-time season of Sprint cup competition, Patrick said she believes she can contend for the win in next month’s Daytona 500 in her first-ever series start. New Stewart Haas Racing Competition Director Greg Zipadelli confirmed Patrick will have a guaranteed starting spot in the “Great American Race,” but declined to say how that position will be obtained. Team owner and defending series champion Tony Stewart could transfer his 2011 owner points to Patrick and rely on a Past Champion’s Provisional for the first five races of the season, or obtain owner points from another Top-35 team.

The 29-year old Patrick said she hopes to run the Indianapolis 500 again one day, adding, "I hope to do it in the future, and maybe it will be a double.”