SAFER Barriers Going In At Rockingham 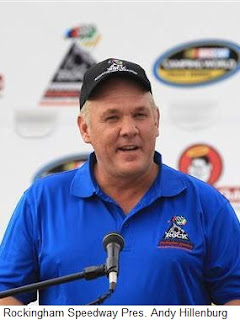 The SAFER barriers are going in at Rockingham Speedway.

Work crews were greeted by sunny but cool conditions when they invaded the legendary North Carolina oval today to begin the final phase of installation for the impact-absorbing barriers, setting the stage for the NASCAR Camping World Truck Series to compete there on April 15 of this year. The barriers were installed on the track's backstretch late last year, and are scheduled to be erected in the turns over the next two weeks.

Rockingham has not hosted a NASCAR race since February 22, 2004, when Matt Kenseth drove his DeWalt Ford to Victory Lane in the Subway 400. Since then, the track has hosted events on the ARCA, USAR Pro Cup, CRA Late Model and Frank Kimmel Street Stock Series, and is home to Hillenburg’s Fast Track High Performance Driving School. The one-mile oval and companion half-mile short track – built in 2008 – have been popular testing venues for many NASCAR teams.
Posted by Dave Moody at 11:54 AM