Commentary: Nationwide and Truck Series' Will Have Less Star Power This Season

Carl Edwards says he will not compete on the NASCAR Nationwide Series this season for the first time in seven years. Kyle Busch is set to announce a Nationwide and Camping World Truck Series schedule this week that will reportedly include only a small fraction of the events he drove a year ago. Kevin Harvick has divested himself of his Nationwide and Truck Series operation, and is expected to run only a limited schedule of events for Richard Childress Racing. Brad Keselowski will share his #22 Penske Racing Nationwide ride with youngster Parker Kligerman.

Even with the addition of Danica Patrick to the Nationwide ranks on a full-time basis, It appears the Nationwide and Camping World Truck Series’ will have considerably less star power in 2012 than they did a year ago. The question is; is that necessarily a bad thing? 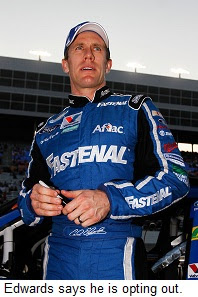 Promoters say drivers like Edwards, Busch, Harvick and Keselowski keep the turnstiles spinning when they drop down to Nationwide and Truck Series competition. Common sense indicates that television viewership also benefits from the addition of top drivers to the lineup. After all, a motion picture with Meryl Streep on its marquee sells more tickets than the same movie with a talented, but lesser-known actress in the lead role.

Does the absence of drivers like Edwards and Busch spell trouble for the Nationwide and Truck Series’ this season? The answer is yes. And no.

While a NNS or NCWTS race devoid of Cup drivers may have diminished appeal to fans long accustomed to Cup-rich Saturday fields, fewer superstars in the lineup will also open the door for Nationwide and Truck Series regulars to run better and win more. NASCAR made the right move a year ago by regulating Cup drivers out of title contention in the lower series, and the prospect of Kenny Wallace, Elliott Sadler, James Buescher and Jason Leffler visiting Victory Lane a time or two this season should appeal to as many ticket-buyers as the loss of the big names will drive away. 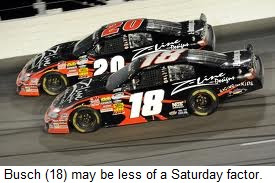 Sprint Cup drivers won 29 of the 34 Nationwide Series races run last season, with Ricky Stenhouse (2), Reed Sorenson, Justin Allgaier and Sam Hornish, Jr. the only Nationwide regulars to break through. On the Camping World Truck tour, 14 of 25 races were won by Sprint Cup interlopers, with Busch leading the pack with a half-dozen wins in just 16 starts.

Clearly, reduced involvement by Cup drivers will result in more trophies going home with Nationwide and Truck Series regulars this season. Over time, it will also allow younger drivers to grab a larger share of the national spotlight; building their own brands and accelerating their careers at a faster rate than previously possible.

If you’re a cost-conscious race fan who enjoyed seeing Sprint Cup stars at Nationwide and Truck Series prices in recent seasons, the pickings will be slimmer this year. If you enjoy rooting for Kyle Busch to sweep an entire, three-race NASCAR weekend, you’ll also have less to get excited about. But if parity, emerging young stars and a race that could go any of a dozen different ways is what you want, 2012 may just be your year.
Posted by Dave Moody at 2:13 PM