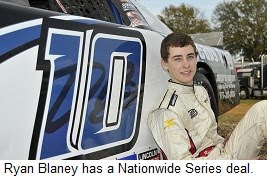 Tommy Baldwin Racing has signed third-generation driver Ryan Blaney to compete in a limited schedule of events on the 2012 NASCAR Nationwide Series. The 18-year old Blaney will drive the No. 36 SealWrap Repair Tape Chevrolet in six events this season, beginning with his debut on April 27 at Richmond International Raceway. Blaney will also run six NASCAR K&N Pro Series races in his family-owned DB Racing No. 10 SealWrap Repair Tape/Heavy Duty machine, beginning at Bristol Motor Speedway on March 17. Trent Owens will return as crew chief for the K&N Pro Series effort.

Blaney, son of Tommy Baldwin Racing Sprint Cup Series driver Dave Blaney, made a combined three starts last season in the Nationwide K&N East and West Series, winning in his third start and capturing his inaugural NASCAR victory at Phoenix International Raceway. Blaney also won the 2011 PASS South Super Late Model championship and found success in the ARCA Racing Series where he finished in the top-10 in his two starts.

“I’m really excited about the opportunity to run a mix of K&N and Nationwide races this season,” said Blaney. “We were really competitive in the K&N Series last year, and I think we will be even more competitive this year. Hopefully, we will have an opportunity to win all six races. We will have good equipment racing with TBR. It will be great to race with and learn from the Nationwide guys. To be able to run on bigger tracks will be a good learning experience, too. I’m grateful that SealWrap is supporting my progression in NASCAR and really excited to work with them throughout the season.”

The 2012 campaign will mark TBR’s fourth season of competition. It began as a part time, single-car Sprint Cup team in 2009 and developed into a top-35 team by 2011. This year, TBR plans to compete with two Cup teams. The new Nationwide effort effort will expand the team's driver development program in the NASCAR Whelen Modified Tour; working toward an ultimate goal of increasing the number of races in both the Sprint Cup and Nationwide Series schedules, pending sponsorship.

Blaney will join his father at TBR this season, and the elder Blaney said he is excited about the opportunity. “I’m proud that Ryan is making the next step in his racing career,” he said. “I think it is a great opportunity for him to run with TBR and still run some races in the K&N Series. He has learned very quickly in every series he has driven, so I am anticipating what competing in the Nationwide Series brings. Thanks to SealWrap and Heavy Duty, who have stepped up their programs as Ryan has moved through the ranks. It’s really refreshing to build a relationship with companies at this level and be able to grow together.”