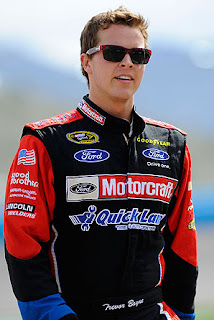 Roush Fenway Racing’s No. 6 Ford Mustang will have a familiar look when Trevor Bayne takes the reins of the NASCAR Nationwide Series championship team in 2013. The organization announced today that Cargill will return as a partial-season primary sponsor next year, beginning with the season opener at Daytona International Speedway. Crew chief Mike Kelley will return to lead the team.


“I’m really excited about the opportunity to work with Mike and this team and run for the Nationwide Series Championship in 2013,” said Bayne, who in 2010 became the youngest winner of the famed Daytona 500. “And it’s great to have Cargill Beef back on board with the No. 6 next season. I’ve enjoyed learning about their business and meeting a lot of their people through their partnership with Roush Fenway, and I look forward to representing them on the track and hopefully in Victory Lane.
“I’ve developed a bit of a reputation at the track for grilling out a lot,” continued Bayne. “Maybe Cargill can give me a few tips on the best way to grill hamburgers for big groups so I can cookout for Mike and the rest of the No. 6 Cargill Beef team for some post-race celebrations.”
“Our partnership with Roush Fenway and the No. 6 Ford Mustang has been a great one for our business,” said Tammy Shaw, VP of Cargill Beef. “We’re thrilled to see Ricky Stenhouse Jr. transition to the next level after winning two championships for Cargill Beef, and look forward to continuing to grow our business, while interacting with customers at the race track.”
“We still have room for one or two more primary sponsors next season on the remaining races with Trevor and the No. 6 team,” added Roush Fenway president Steve Newmark. “It’s an unusual but exciting opportunity for a potential partner to join a proven team seeking its third consecutive championship in the Nationwide Series, and with a driver who is one of the most popular in the sport.”