There was plenty to remember about the recently completed 2012 NASCAR season. A new Sprint Cup Series champion and scintillating battles for both the Nationwide and Camping World Truck Series titles kept fans guessing from February through November, and made choosing a 2012 “Best Of” List difficult, to say the least… 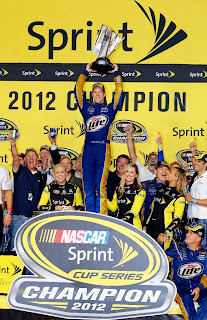 Top Performers: Brad Keselowski: Nobody won more Sprint Cup races in 2012 than Keselowski, and when the Chase rolled around, he and crew chief Paul Wolfe combined speed (two wins) and consistency (eight Top-10 finishes in 10 races) to unseat heavily favored, five-time champ Jimmie Johnson in a dramatic upset. Keselowski never finished worse than 15th in the Chase, and even that 15th-place showing came in a Homestead finale that made discretion the better part of valor. He joined NASCAR Hall of Famer Dale Earnhardt and Jeff Gordon as the only drivers to win a Sprint Cup Series championship in their first three seasons.


Ricky Stenhouse Jr. – Stenhouse not only defended his 2011 Nationwide Series championship, he trumped it. He won a total of six races, led the championship standings on eight different occasions during a see-saw battle with eventual runner-up Elliott Sadler, Austin Dillon and others, and never fell out of the top three after early June. That kind of performance gets a guy promoted, and Strenhouse will race full-time on the NASCAR Sprint Cup Series in 2013, replacing Matt Kenseth in Jack Roush’s potent No. 17 Ford.
Joey Logano – Stenhouse may have won the Nationwide war, but Logano claimed most of the battles. The Joe Gibbs Racing driver almost singlehandedly won the 2012 owners’ championship, claiming a season-high nine victories and six poles in just 22 starts. Many of those wins came in dominant fashion, despite announcing with three months left in the season that he would leave JGR for a new ride with Penske Racing in 2013. 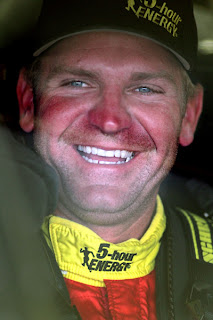 Best Rebounds: Clint Bowyer -- One year ago, Bowyer found himself the odd man out at Richard Childress Racing. A win at Talladega Superspeedway and the backing of sponsor 5-hour Energy were not enough to keep him in the seat of RCR’s No. 33 Chevrolet, forcing Bowyer to pack his bags and move to Michael Waltrip Racing in 2012. That decision may have been the best of his career, as MWR authored a breakout season that saw Bowyer win three times at Sonoma, Richmond and Charlotte en route to second place in the final standings. The Emporia, Kansas, native will enter the 2013 season on the short list of drivers to beat for the Sprint Cup Series championship.
Sam Hornish Jr. – After going without a full-time ride a year ago, the former Indianapolis 500 champion made the most of his steady seat in Roger Penske’s No. 12 Alliance Truck Parts Dodge, contending for the Nationwide Series championship for much of the season before eventually settling for fourth in the final rundown. He also filled the void admirably when AJ Allmendinger was ousted from the No. 22 Shell Pennzoil Dodge, doing double-duty in the Sprint Cup and Nationwide garages during the second half of the season. Look for Hornish to make even more noise as a Nationwide title contender in 2013.
Michael Annett – In mid-February, Annett found himself unemployed when Rusty Wallace Racing abruptly closed its doors. Two weeks before the season-opener at Daytona, he forged an eleventh-hour deal to drive for the new Richard Petty Motorsports Nationwide Series team, and nine months later, he stood onstage at the NASCAR Nationwide Series Awards Banquet after enjoying the most successful season of his NASCAR career. Annett collected six Top-5 and 17 Top-10 finishes en route to fifth in the final series standings, including eight consecutive Top-10s in August, September and October. 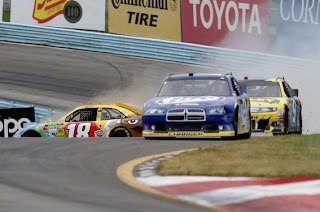 Best Races: Finger Lakes 355, Watkins Glen (Aug. 12) – The Sprint Cup Series’ annual stop at The Glen had it all; multiple leaders, plenty of full-contact racing and a spectacular final lap that featured no less than four lead changes among three different drivers. Kyle Busch, Brad Keselowski and Marcos Ambrose all held the top spot at various points in the race’s final circuit, and all three spent significant time off-course, kicking up huge rooster tails of dirt while teetering on the ragged edge of control. Ambrose eventually claimed the checkered flag, but only after a final lap that arguably ranked as the most exciting in the history of NASCAR.
IRWIN Tools Night Race, Bristol (Aug. 25) – The Bristol Motor Speedway of old returned in August, after a million-dollar facelift resurrected the kind of fender-bending, bump-and-running, finger-flipping emotions fans have grown to expect of Bruton Smith’s modern-day Roman Colliseum.  Thirteen different drivers led at least one lap, and a record 13 caution flags punctuated the evening’s festivities. Before Denny Hamlin wheeled his Fed-Ex Toyota to Victory Lane, Danica Patrick gave Regan Smith the finger (no, not that one) and Tony Stewart rifled his helmet off the hood of Matt Kenseth’s Ford. Just another night at “Thunder Valley.”
Ford EcoBoost 300 at Homestead-Miami (Nov. 17) –Regan Smith got a head-start on the 2013 NASCAR Nationwide Series season, returning to the series after a five-year absence and driving the No. 5 JR Motorsports Chevrolet straight to Victory Lane. The race was competitive from start to finish, with 10 different leaders and 13 lead changes, with Smith’s late charge denying polesitter Kyle Busch a visit to Nationwide Victory Lane for the first time in eight years. All three title contenders – Stenhouse, Elliott Sadler and Austin Dillon – led the race, with Stenhouse prevailing for the title.
Photos: Terry Renna/AP, Stew Milne/US Presswire, Jerry Markland/Getty Images For NASCAR
Posted by Dave Moody at 11:12 AM