Kenseth To Be Backed By Husky Tools At JGR 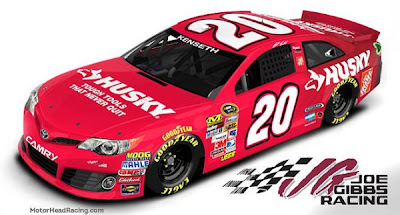 The Home Depot will utilize the home improvement store’s proprietary tool brand, Husky, as the primary sponsor for the Joe Gibbs Racing No. 20 Toyota in each of its NASCAR Sprint Cup Series races during the 2013 season.


Through this partnership The Home Depot looks to reward its customers through Husky Days of Giving, a Facebook contest offering the chance to win great Husky products daily as well as a grand prize to be awarded at the end of the promotion.
Husky will be the primary sponsor on JGR’s No. 20 NASCAR Sprint Cup Series entry in 20 races during the 2013 season and The Home Depot will remain the associate sponsor when Dollar General serves as the car’s primary sponsor.
Fans can get a special unique first look the new Husky paint scheme by clicking on this link and then clicking the “like” button for Husky Tools: http://www.joegibbsracing.com/husky2013.
To go directly to the Husky contest page, click on the following link: https://www.facebook.com/pages/Husky-Tools/172998836050220?sk=app_100132936820333.
Once there, you can click “like” to become a fan of Husky and then click on the big “enter” button at the center of the page to fill out the entry form before hitting the submit button for a chance to win. Fans can enter once daily between now and December 24 for their chance to win.