Lofton Wins In The Desert 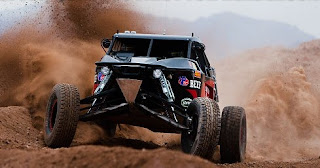 
Teaming up with Jorge Lameda in the No. 1577 Unlimited Jimco, Lofton took on 16 other competitors in their class. The duo successfully completed three laps on an approximate 80-mile course filled with large rocks, steep drop-offs and cliffs, to complete nearly 250 miles in the Nevada desert. The title was Lofton's first race win of the 2012 BITD season, and his second title in the “Henderson 250."


Lofton, a full-time competitor in the NASCAR Camping World Truck Series can now boast of 2012 wins in both the NCWTS and BITD series.


"I'm so proud to be able to defend my 2011 win in the `Henderson 250,’" commented Lofton. "It's great to be back in the desert racing again. A big thank you to all of my supporters out there. It's been a good year of racing for me, and I am honored to have 2012 victories on both a NASCAR track and off-road circuit. The style of racing is so different in both series, so it is a big thrill for me to come out and be challenged like this; it makes the wins that much sweeter."
Photo: race-dezert.com
Posted by Dave Moody at 2:28 PM