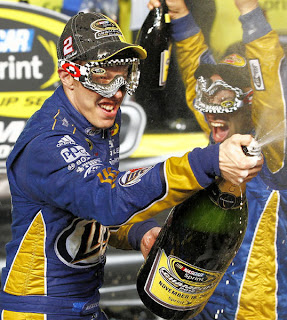 
Brad Keselowski, no one’s pre-season choice to win the 2012 NASCAR Sprint Cup Series championship, stumped all the experts. In turn, members of the NASCAR media have voted Keselowski’s title run for owner Roger Penske as NASCAR’s top story of the past season.
Keselowski’s first championship prevailed in the voting over Dale Earnhardt Jr.’s drought-busting victory in June at Michigan International Speedway.
Now that media members have had their say, it’s the fans’ turn. Beginning at 5:30 p.m. ET this evening, fans can vote for their favorite competition stories of 2012 on the NASCAR Facebook page, www.facebook.com/NASCAR.
1. Brad Keselowski’s First Championship -- Three races into the season and two finishes worse than 30th, Keselowski appeared a dark horse even to qualify for the postseason. But a second consecutive victory at Bristol Motor Speedway helped turn around the fortunes of the No. 2 Penske Racing Dodge team and by mid-September Keselowski was the No. 3 seed when the Chase for the NASCAR Sprint Cup got underway. With two wins in the first three races, Keselowski went from underdog to favorite. He lost the points lead when five-time champion Jimmie Johnson won at Martinsville but refused to fade under pressure. A top-10 finish in the penultimate race at Phoenix coupled with Johnson’s accident and mechanical failure in the finale clinched the title for Keselowski, Penske and crew chief Paul Wolfe.
2. Dale Earnhardt Breaks 143-Race Winless Streak -- Entering the 2012 season it had been nearly four years and more than 125 races since Earnhardt had won a NASCAR Sprint Cup race. Even some among his legions of fans openly wondered if Junior would ever grab another checkered flag. But this season the Hendrick Motorsports driver brought his “A” game, posting two seconds and a pair of thirds over the schedule’s first nine races. The breakthrough victory came at Michigan International Speedway virtually to the day and at the site of Earnhardt’s last win in June 2008. The 143-race drought was cleansed June 17 in a race on a brand-new track surface over which Junior led 95 laps and beat reigning champion Tony Stewart by more than five seconds. 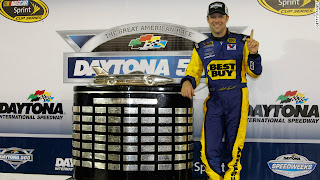 3. Matt Kenseth Wins Explosive Daytona 500 -- No Daytona 500 is ever quite like any other and this year’s Great American Race was no exception. Rain postponed the race for the first time in history dating to the inaugural race in 1959. And – again a first – the Daytona 500 became a Monday night affair. Matt Kenseth proved to have the winning hand as his No. 17 Roush Fenway Racing Ford led the most laps and held off Earnhardt in a green-white-checker finish to record his second Daytona 500 victory in four years. What many will most remember about 54th annual event was the Turn 3 fireball resulting from Juan Pablo Montoya’s Chevrolet, which suffered a mechanical failure, slamming into a jet dryer.
4. Michael Waltrip Racing Makes Chase In Style -- Since becoming a fulltime NASCAR Sprint Cup Series team in 2007, Michael Waltrip Racing had experienced the joys of winning but never the fruits of a post-season run. David Reutimann had come closest to qualifying for the Chase – 16th in 2009. Five seasons of frustration ended in 2012 as not one but two of MWR’s drivers – Clint Bowyer and Martin Truex Jr. – made the Chase. Bowyer, the organization’s first-year driver, made the most of his opportunity winning twice including Charlotte’s Chase race. Bowyer finished a career-high second in final standings. Truex ranked 11th. 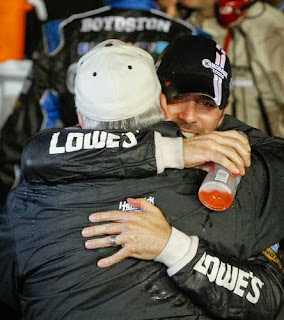 5. Hendrick Motorsports Records 200th Victory -- Leave it to Jimmie Johnson to register Hendrick Motorsports’ milestone 200th victory. The organization’s driver with the most championships – five – ended a 16-race, two-season count-down for win No. 200 on May 12 at Darlington Raceway. Johnson had won No. 199 at Kansas Speedway in October 2011, drew blanks ever since. Reaching the milestone seemingly ignited the fuse for HMS, which won three consecutive races including Kasey Kahne’s Coca-Cola 600 victory at Charlotte Motor Speedway. Each of Hendrick’s drivers – Johnson, Kahne, Earnhardt and Gordon – won in 2012 as well as qualified for the Chase.
6. Classic Rockingham Raceway Returns To NASCAR In 2012 -- Rockingham Raceway, in North Carolina’s sand hills, has provided many thrills during its five decades as a part of the NASCAR Sprint Cup Series. The track’s run ended after the 2004 season. Rockingham, under ownership of Andy Hillenburg, roared back to life in 2012 when the NASCAR Camping World Truck Series debuted under sunny skies and before full grandstands on April 15. Kasey Kahne, who finished second to Matt Kenseth in the track’s final NASCAR Sprint Cup race, drove his Chevrolet Silverado to Victory Circle posting the first series victory for Turner Motorsports.
7. Stenhouse Goes Back To Back In The NASCAR Nationwide Series -- Since the NASCAR Nationwide Series was created in 1982 only five drivers had won consecutive championships. In 2012, Ricky Stenhouse Jr. became the sixth member of the series elite. Stenhouse battled Elliott Sadler – his chief rival in 2011 as well – throughout the season. The points lead changed hands five times with Stenhouse and his No. 6 Roush Fenway Racing Ford forging ahead for the final time after a fourth-place finish at Texas Motor Speedway in November. Stenhouse moves to RFR’s No. 17 Ford for a NASCAR Sprint Cup rookie campaign in 2013.
8. Patrick Makes History With Top-10 Championship Finish --Danica Patrick became a full-time NASCAR driver for the first time in 2012 and she made the most of her opportunity with JR Motorsports. Patrick, who would become the highest-finishing female driver (fourth) in a NASCAR national series a year ago, made history again. Her 10th-place NASCAR Nationwide Series championship finish set a new standard for female competitors erasing Sara Christian’s previous record of 13th in 1949 NASCAR Sprint Cup standings. Patrick finished four times in the top 10 and won the Coors Light Pole for the season opening race at Daytona. She’ll move to the NASCAR Sprint Cup Series fulltime in 2013 with Stewart-Haas Racing. 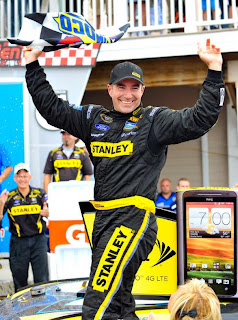 9. Ambrose Wins Second At The Glen In Wild Finish -- You couldn’t have scripted a wilder finish than that of August’s Finger Lakes 366 at the Glen. Take three hungry hounds – Kyle Busch, Brad Keselowski and Marcos Ambrose – mix in the drama of a final lap and stir with the possibility of making or missing the Chase and you’ve got a recipe for one of the year’s wildest conclusions. The final laps saw leader Busch and Keselowski collide and Keselowski on and off the track and running side-by-side with Ambrose, who finally pulled out a half-second victory off the final turn. Busch’s loss was the difference between making the Chase as a Wild Card and being a spectator in the postseason.
10. Jeff Gordon Claims Final Wild Card Spot At Richmond -- Nail-biting intrigue sits atop the menu whenever the NASCAR Sprint Cup Series rolls to race No. 26 – the Chase cut-off race at Richmond International Raceway. And the 2012 edition ranks among the best versions since its inception in 2004. For the first time since 2009, a driver outside the Chase bubble raced his way in after the 400-lapper. That driver – four-time series champion Jeff Gordon, who leap-frogged past Kyle Busch to earn the second Wild Card spot by three points. Gordon finished second in the race. Busch, thanks in part to a lug nut problem on pit road, finished 16th, missing the Chase for the first time since 2009.
Photos: Nigel Kinrace/Autostock