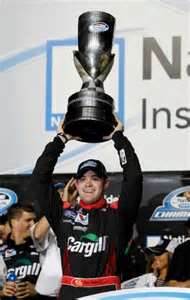 Lately, a Ricky Stenhouse Jr. visit has become as much of a Columbus December tradition as Christmas trees and snowmen.


For the second consecutive season, Stenhouse, the 2012 NASCAR Nationwide Series driver champion, and his No. 6 Roush Fenway Racing team will take part in a full day – and evening – of activities today, hosted by series sponsor Nationwide Insurance in its headquarters’ hometown of Columbus, Ohio.
This is the fifth consecutive year that Nationwide Insurance has welcomed the series driver champion to its home turf, and the second consecutive year that Stenhouse and his entire team – led by crew chief Mike Kelley – has made the trip.
Since the NASCAR Nationwide Series and NASCAR Camping World Truck Series Awards in Miami last month, Stenhouse has been busy celebrating his back-to-back series championships. He participated in NASCAR Champion’s Week by doing burnouts down Las Vegas Blvd., in the 2013 NASCAR Sprint Cup Series Ford Fusion, followed by last week’s USO tour to the Middle East and Germany.
"Nationwide Insurance does so much for our series that it is a true honor and privilege to represent them as their champion for two years now,” Stenhouse said. “We had a great time in Columbus last year so I am looking forward to bringing my guys back. It is great to see all the Nationwide associates that support us each and every weekend."
Stenhouse kicks off the day with an exclusive Q&A session with Nationwide associates followed by a tour of the corporate headquarters with the No. 6 championship-winning team. After the Q&A session and tour, Stenhouse and his team will sign autographs for associates on site.
At 2 p.m., the driver and champion team will visit the new facilities at Nationwide Children’s Hospital where the team will exchange gifts and play games with patients. Nationwide Children’s Hospital, an international leader in pediatric research and care, serves nearly one million patient visits annually, caring for children from every state and 28 nations round the world. The visit is fresh off last month’s announcement of the Nationwide Children’s Hospital 200 at Mid-Ohio as part of the NASCAR Nationwide Series 2013 schedule.
The day concludes with a trip to the Jerome Schottenstein Center where Stenhouse and the champion team will be honored during the pregame festivities of the Ohio State University men’s basketball game against Savannah State. Stenhouse Jr. will present the game ball to the Buckeye basketball team.