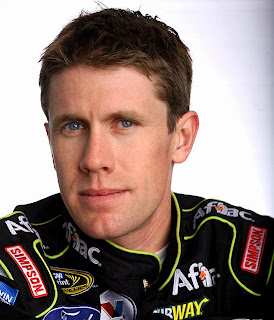 It’s been a season to forget for Carl Edwards, with no NASCAR Sprint Cup Series wins and a failed attempt to make the 2012 Chase. But the Roush Fenway Racing driver will reach a career milestone Sunday at Phoenix International Raceway, making his 300th start in the NASCAR Sprint Cup Series. IN his 299 starts to date, Edwards has achieved 19 wins, 92 Top-5 and 157 Top-10 finishes, along with 11 poles.


“My first start on pavement was at Phoenix in 2001 so it’s neat to be starting my 300th Sprint Cup Series start there,” Edwards said. “I cannot thank Jack Roush, everyone at Ford and all the people who believed in me enough, and gave me this opportunity to run all these races. I’ve learned a lot and hopefully the next 300 races include a bunch of wins and championships. That’s our mission right now. This is a milestone and a reminder of how far we’ve come, how much we’ve learned and how much we’ve got to look forward to in the future.”
Edwards’ first Cup start came at Michigan on August 22, 2004. He was able to claim his first Top-10 finish in his first start, finishing 10th in the No. 99 Ford.
“Greg Biffle won the race and all five of Jack Roush’s Fords finished in the Top-10,” Edwards said. “I finished 10th and it was a great day. I can’t tell you how neat that was. That race was 400 miles long and it could have been 4,000 miles long and I wouldn’t have cared. I was so pumped to be driving one of Jack’s Cup cars.”
Only seven months later he broke into the win column at Atlanta Motor Speedway to mark the first of his 19 Sprint Cup wins. He only led nine laps in that race, but he led the most important one which was the final lap.
This weekend at Phoenix Edwards will aim to make it a double-milestone weekend with his 300th start and 20th Sprint Cup win.
Posted by Dave Moody at 11:09 AM