Ricky Stenhouse, Jr., accomplished something only five drivers in the history of the sport had ever done Saturday night, clinching his second consecutive NASCAR Nationwide Series championship.


The Roush Fenway Racing driver ran a consistent race to finish sixth in Saturday’s Ford EcoBoost 300 at Homestead Miami Speedway, claiming the title by 23 points over Elliott Sadler and 24 over Austin Dillon. When it was over, Stenhouse said his second series title was even more gratifying than the first.


“The performances this year were a lot better than last year,” he explained. “I think that is what you have to look at. It is special having that first championship, but when you can go out and you are a car to beat every week; that is what classifies a great year. I felt like we were that car this year (and) I think that makes this year more special.”

“It feels really good,” he said. “It’s a testament to how hard Jack works to put these guys together. (Crew chief Mike Kelley) has done a great job building this team.  He came to me when I was a rookie in 2010 and brought speed in the car and helped me to finish these races and figure this out.  We won Rookie of the Year in 2010 and we were at the banquet and said we wanted to be there in 2011. We were able to accomplish that. 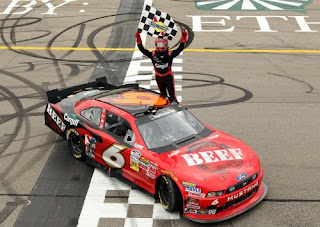 “Last year, we told each other we wanted 6-10 wins and another championship, and we got that.  It’s just a lot of hard work by a lot of great people and I’m just blessed to be a part of it.”

Team owner Jack Roush said that in his 25-year NASCAR career, “I’ve never had anything that has worked better than the relationship between Mike and Ricky.  They are both going to do very well in this business for a long time to come.  It’s hard to put together a second championship on the heels of a first, especially when it’s your first and second that you’re dealing with.  I’ve never seen it done before.  Ricky and Mike really deserve my thanks and my credit for the great job they did.


“We’ve had a great time and it’s just super to be down here with Ford Championship Weekend and be able to celebrate another championship.”

Despite securing his second consecutive Nationwide Series crown, Stenhouse said he was disappointed in his performance Saturday.

“We lost the race,” he said. “I like winning races. I didn’t come to my favorite race track to run sixth. I think seeing my guys excited is what I like to see and I know they were excited and their families were excited and they have put a lot of effort into letting them go on the road. Yeah, I am excited about it and definitely excited and will celebrate the championship for sure on Monday. We have a Cup race to run tomorrow. I am just pretty disappointed we didn’t win the race.”


Stenhouse also admitted sparring with spotter Mike Calinoff in the final laps, disagreeing over whether to race hard for the win, or be conservation and secure the championship.
“I got tired of listening so I keyed the microphone so he couldn’t talk to me anymore,” laughed Stenhouse. “He wanted me to let them go and I wanted 20 Top-5s, so we came up one spot short. We wanted to win the race. That’s what we come to do each and every week, and that’s what got us in the position that we were in. I like racing hard like that. That’s what I do. That’s what I enjoy and that’s why I love racing. That’s just how I drive.”
“Mike Calinoff was trying to do what he thought was best for Ricky and best for the team,” said Roush. “He was getting on Ricky’s nerves a little bit. My concern was that (Ricky would) fool around and hit the wall while he was trying to hold the damn button down,” he laughed.
Photos: Jamie Squire/Getty Images, Chris Graythen/Getty Images
Posted by Dave Moody at 11:49 AM