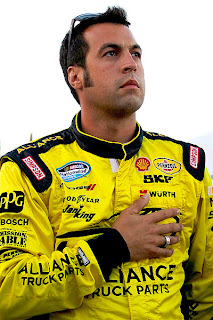 In the midst of the final weekend of the NASCAR season, team owner Roger Penske confirmed yesterday that Sam Hornish, Jr. will return in 2013 to drive a full schedule of events on the NASCAR Nationwide Series, in addition to a partial slate on the NASCAR Sprint Cup Series.


“We've signed Sam up to drive the #12 Alliance car in Nationwide next year,” said Penske Friday. “We have a commitment for a number of Cup races on a third car, and Sam will be there to run those races.”
Hornish is currently fourth in the Nationwide championship chase, 107 behind leader Ricky Stenhouse, Jr.  He has also done yeoman work in Penske’s No. 22 Sprint Cup Series Dodge, replacing AJ Allmendinger at midseason after Allmendinger was suspended for failing a random test for banned substances.  Despite enjoying the most successful year of his NASCAR career and contending for the Nationwide title, the former Indy Car remained unsigned late in the season, due to a lack of available sponsorship.
In a related story, Penske said third-generation driver Ryan Blaney is under consideration to drive the No. 29 Brad Keselowski Racing Camping World Truck Series entry next season
“We haven't announced it yet, it's not a done deal, but we'd like to see him in the truck,” said Penske. “We'll also provide him some Nationwide rides. We started with him running two or three (times) this year, and I think he'll end up with seven or eight.
“We think he's a fine young man,” Penske said. “He's got a lot to learn like they all do, but I think he's certainly coming from a family that's been racing, and he seems to have the talent. There's a lot of good young talent out there today, so we certainly want to support him."
Photo: Chris Graythen/Getty Images
Posted by Dave Moody at 10:05 AM