Penske Says Keselowski Has Made His Team Championship-Worthy

Team owner Roger Penske has been a part of the NASCAR Sprint Cup Series for decades, but the Penske Racing owner said today that Brad Keselowski has made the team championship material.


“It's his chance on Sunday to get to the top rung that he's been trying (to reach) for many years,” said Penske. “We're very fortunate to have him part of Penske Racing.  He's made us a better team.
Asked about his inability to win a NASCAR Sprint Cup championship, Penske said remaining a single-car team may have played a limiting role.
“We've been close,” he said. “We've won a lot of races. (But) we haven't had the same number of chances when you look at our statistics; the number of starts that we've had on the team.  There's been some super competition out there, when you look at the great teams that we compete against.
“One of the things that people maybe haven't even thought about is we've gone to two cars. The business was a lot different in the '90s,” he said. “We didn't have the technology, and the cars are so tight with the templates and things you have to do. The decision to run two cars (has helped). If we've got something good, we can get it on both cars. I think the two-car team has helped us, and from an engineering standpoint, we've stepped up our game.
Penske also reflected on a tumultuous 16-month period that has included the release of Kurt Busch and AJ Allmendinger’s suspension for a substance abuse violation.
“I work in the business world every day, and when you read the newspaper… every day isn't a good day.  I guess that I've decided every day is not a good day in racing, either. To me, personally, it's another day in the office. “I'm a goal-oriented person, and there's no question that winning a NASCAR championship at the elite level is something that everybody in racing wants to accomplish. We haven't done that. I think we’ve spread ourselves through many different series with great success, but we've never quite gotten to the top (in NASCAR). In '93 and '94, we were second and third with Rusty. And then we really have not had the results. But to me, this is about opportunity.

“This business has changed,” he said. “It's a little more technical now, it's a little more in our bailiwick. And we're executing. With a leader like Brad who really cares about the team… he is every day trying to make our team better.  So that's motivating me, and this is a great opportunity.
“Rick Hendrick is a great friend of mine,’ said Penske. “I have a lot of respect for him, both on the business side and on the racing side. Jimmie Johnson is a cool cat.  He knows how to get it done.  He's gotten it done five times, so just being in the league with them; it's the final day, you're teeing up the last 18 (holes) and we're in the same foursome, so that's a pretty good day.
The longtime team owner said that of all the drivers he has employed, Keselowski reminds him most of multi-time Indianapolis 500 champion Rick Mears. “When it was time to dig deep and make it happen, I'd have to put him in that category, which is a pretty special class as far as I'm concerned.”
He also said Keselowski has spent much of the 2012 season preparing himself for the rigors of a championship chase.
“I think that he's been training over the last 13 or 14 weeks to get where he is,” he said, adding that Keselowski has learned when to race hard, and when not to. “Starting 24th (at Phoenix), many times during that race he let people go by because he knew he needed to be ready to go with 100 laps to go,” Penske said. “He's a calculating driver.  He's smart.  I think his windshield is much wider than many of the drivers'.  He's seeing what's going on, and I think he's rehearsed things that can happen. He's done it with the team, and he's a student.
“Today we've got a great athlete, a great race driver but also someone that's thinking.  He's a thinking-man's driver, which is very important in today's sport.” 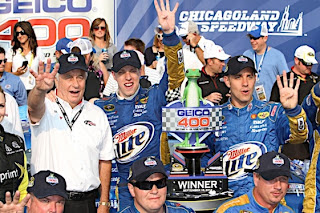 While Penske has traditionally focused the majority of his racing effort on Indy Cars, he said Keselowski has motivated him to spend more time attending to his NASCAR operation.
“Brad has not only pushed me as an individual, he's pushed the team in a positive direction and he's delivering,” said Penske. “It's one thing when someone is pushing you and they don't deliver, but he seems to be able to give us that extra push and deliver on race weekends. That's what we're expecting him to do this weekend.
“There's no question that Brad is in contact with me every day, and you know how he is… (laughs). Texts…  I'm not a tweeter at this point, maybe that's going to be next year.  I don't know.  I don't know what he's got in store for me.
“He has a list, he and Paul. They provide me with a list of the things they feel can make the team better and the car better. Brad thought we should upgrade our fitness center. (It had) nothing to do with racing, but with the team, human capital.  He's passionate about the sport and he wants me to be involved.”

Penske said crew chief Paul Wolfe has also played a major role in the team’s ascension to championship status, saying, “He was a driver. He's had to build his own cars, and he certainly understands the business. He's got experience, and he's been the glue. I think he's been a good sounding board for Brad, because he's been a driver and he understands the cars completely and that's what it takes.
“He's calm, he's cool,” said Penske. “There have been a lot of comparisons with that relationship between Brad and Paul, and Chad Knaus and Jimmie.  Those guys are the best, and if we can just be in their shadow and in their draft and stay with them this weekend, we're going to have a great season.
Penske said he has a long history with the Keselowski family, and believes his driver climbed the NASCAR ladder the right way. 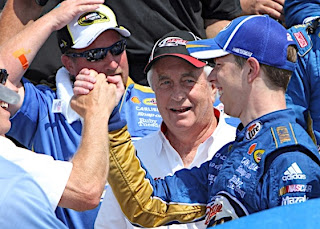 “I knew the Keselowskis very well, because owning the Michigan Speedway, they were our local guys. I didn't really meet Brad specifically, but Ron and Bob were guys that I knew very well because they'd come out and race. Bob, his dad, is a terrific person. Kay, his mom, they mortgaged everything for those kids to go racing, and I think people might not know that. Brad is paying him back now, because he's not only been able to support them as a family, but also with the success he's had as an individual and also as a race driver.”
And while it hasn’t always been smooth sailing between Keselowski and his fellow drivers, Penske said he believes the driver of the Miller Lite Blue Deuce has earned the respect of his peers.
“I think the most important thing that's happened (is) he's gained the respect in the garage area. Early on, he was rough. He was bumping people. There were incidents with Carl Edwards and other people, but I think he's emerged. He's learned, like a lot of the great drivers that have gone through that rough patch.  To me, the speed (with which) he's come from where he was when he started with us to where he is today -- smooth, understanding the car, and ultimately being a winner -- to me is amazing.  He's done it in just 36 months.
“I can't get into what people think about him,” said Penske. “All I know is the people in the garage area have come up to me and said, `this guy is really doing a job for you.’ Those are my peers who are saying, `You've got the best in the business.’  That's my report card, not what might be said by someone else in a different conversation.
“I think even Carl Edwards would say that this young man has come a long way, and those guys had some real tough fights there for a while. I think that's all changed.
“He's got a great future ahead of him. We expect him to deliver for us over a long period of time.”
Despite dozens of race wins and numerous Indianapolis 500 titles, Penske said a Sprint Cup championship would be “the pinnacle of achievements that we could get in motor racing. This NASCAR Sprint Cup… I heard Jimmie Johnson say it's a war out there, and it is.  And to be standing at the end with the American flag in your hand when it's all over and be the champion is something real special, and we've not achieved it.  I don't want to sit down in the front row (at the banquet) anymore.
“I want to be up on the stage so I see who's at the party.”