Penske Poised On The Brink Of A Milestone 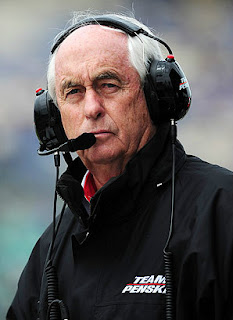 With 15 Indianapolis 500 trophies and a massive collection of checkered flags from every North American motorsports event of any import, there’s only one thing missing from Roger Penske’s racing resume’; a NASCAR Sprint Cup Series championship.


He also experienced tremendous success in NASCAR competition, winning 73 NASCAR Sprint Cup and 20 Nationwide Series races, including the 2008 Daytona 500 with driver Ryan Newman. Penske Racing also served as a perennial (though unsuccessful) challenger for the Sprint Cup Series title with veterans Bobby Allison and Rusty Wallace, Kurt Busch, Keselowski and Sam Hornish Jr. But somehow, despite all his race day success, the Sprint Cup championship trophy has remained just beyond "The Captain’s” grasp.
Barring a major turn of events, that will change Sunday afternoon in South Florida, when Penske Racing claims its first Sprint Cup title at Homestead Miami Speedway. A 15th-place finish by Brad Keselowski will be enough to fend off five-time champion Jimmie Johnson and bring the championship home to Penske’s 424,000 square foot complex in Mooresville, North Carolina; a victory likely to be hailed by even Penske’s most heated rivals.

The title – if it comes – will be the first for Dodge since Richard Petty claimed the crown in 1975. It may also be their last, with the automaker announcing recently that it will withdraw from NASCAR competition at season’s end.

“I would hope that they come back as soon as possible,” said Keselowski of his current manufacturer. “I think it's important for the sport to have as many participating manufacturers as possible, especially one that fits the sport as well as Dodge does.”


Regardless of Dodge’s plans, Penske Racing will forge on in 2013, sporting a new alliance with Ford Motor Company and Roush Fenway Racing that could make the team even stronger than it was this season. Youngster Joey Logano will join Keselowski in the team’s Sprint Cup lineup, giving Penske sufficient youth and talent to contend for championship well into the next decade.


First, though, comes Sunday and the fulfillment of a dream.
Photo: Rick Dole/Getty Images
Posted by Dave Moody at 1:00 PM