OneMain Financial Stays With Sadler In 2013


Mary McDowell, President and CEO of OneMain Financial stated, “We are thrilled to continue our incredibly successful presence in the NASCAR Nationwide Series. Our customers and employees are huge supporters of this great sport, and we could not be happier to continue our relationship with Elliott Sadler and team up with Joe Gibbs Racing in this new partnership. Elliott and our racing program were integral components of the OneMain Financial brand launch last year, and we are looking forward to continuing to leverage this platform to grow our brand and our business in 2013."
The 2013 season will mark OneMain Financial’s 10th season as a sponsor in NASCAR and they remain committed to the sport and the connections it enables them to make with their customers and employees. Over the last two seasons, the OneMain Racing program with driver Elliott Sadler has recorded four wins, nine poles, 27 Top-5 and 48 Top-10 finishes in 68 starts. 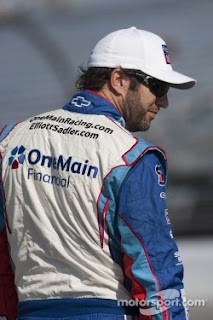 Sadler comes to JGR as an experienced NASCAR veteran and will start the next chapter of his 17-year career by continuing his relationship with OneMain Financial as he runs for a championship in 2013. Voted the 2011 Nationwide Series Most Popular Driver, Sadler finished second in the battle for the championship in 2011 and 2012. In 195 career series starts, Sadler has accumulated nine wins, 46 Top-5 and 85 Top-10 finishes. In 2010 Sadler became the 21st driver to win a race in each of NASCAR’s national series; Sprint Cup, Nationwide and Camping World Trucks.
“OneMain Financial has been a flagship sponsor in the NASCAR Nationwide Series since 2005. I consider myself very fortunate to have shared in much of their success on and off the track. We've won poles and races together and hope to continue our winning tradition in 2013. Joe Gibbs Racing and Toyota have been a dominant combination in the NASCAR Nationwide Series and I'm elated to have an opportunity to join forces with them as well,” said Elliott Sadler.
”We’re excited about the partnership with OneMain Financial and having Elliott Sadler join our team in 2013,” said J.D. Gibbs, President of Joe Gibbs Racing. “OneMain Financial has been a tremendous supporter of our sport and has developed a successful program that engages both their customers and employees. Elliott is obviously a great talent and his experience will be an asset to our entire Nationwide Series program.”
Posted by Dave Moody at 2:19 PM