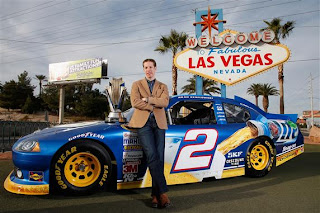 
Different day, different city, different setting.
The prelude to Champion’s Week in Las Vegas took Keselowski to New York City for a number of media obligations, including an appearance on “The Late Show With David Letterman.” On Tuesday, he was still talking about meeting iconic comedian/host, saying, “He was even funnier in person than on TV.”
On the opening day of Champion’s Week festivities in Las Vegas, Keselowski was channeling Willie Nelson, singing the opening lines of “On the Road Again.” A road that began in early March in Daytona Beach, Fla. with the Daytona 500 will conclude Friday when Keselowski, team owner Roger Penske and crew chief Paul Wolfe celebrate their first NASCAR Sprint Cup championships at Wynn Las Vegas.
Tuesday was Media Day for the 28-year-old, first-time champion. “You have questions; I have answers,” said Keselowski while greeting one in a series of television interviewers. At the Las Vegas Review-Journal, the subject matter turned to tanks. Keselowski, whose foundation serves military personnel and veterans, agreed a tank would make a nice addition to his collection of vehicles.
“I don’t want to do what everyone else does; I want to be different,” he said. “It will look good parked in my driveway behind my gate.”
Keselowski also spoke highly of the new, sixth generation stock car he and his NASCAR Sprint Cup colleagues will drive in 2013, calling it a “game changer for the sport” and adding, “it has way more growth potential than the current model.” 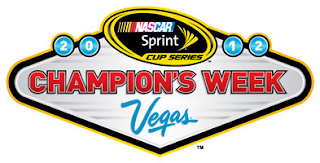 Keselowski and Wolfe surveyed the Wynn’s spacious hall where workers are readying the banquet room and red carpet area. He playfully picked up Clint Bowyer’s banner and placed it behind his own – just to be sure everyone knew who finished first.
The champion also visited a number of Las Vegas’ iconic destinations, including the Welcome to Las Vegas sign, the set of Beatles LOVE by Cirque du Soleil at The Mirage and the House of Blues Foundation Room at Mandalay Bay.
Keselowski also participated in the opening day of NASCAR 2012 Motorsports Marketing Forum at the Aria, an event that continues today.
Overall, Keselowski said he was pleased to be back in Las Vegas; a 32nd-place finish in March’s race at Las Vegas Motor Speedway now all but forgotten. “Vegas is a special place to be,” he said. “It is a win-win situation for NASCAR and the fans. We love coming out here. It is a great week to be a race fan in Las Vegas.”
NASCAR’s Chase for the NASCAR Sprint Cup™ qualifiers take over downtown’s legendary Fremont Street Experience on Wednesday for the Fourth Annual Fanfest Presented by Las Vegas Motor Speedway. The 12 drivers will walk the red carpet, interact with fans and participate in a game-show format hosted by comic Carrot Top.
Posted by Dave Moody at 11:40 AM