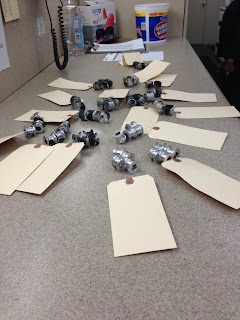 
The violations cut a wide swath through the Sprint Cup Series garage, with three manufacturers and eight different teams feeling the wrath of NASCAR’s rules enforcers. The list of violators included the Roush Fenway Racing Fords of Carl Edwards, Greg Biffle and Ricky Stenhouse, Jr., the Joe Gibbs Racing Toyotas of Matt Kenseth, Denny Hamlin and  Kyle Busch; the Penske Racing Fords of Brad Keselowski and Joey Logano, the Michael Waltrip Racing Toyotas driven by Clint Bowyer, Michael Waltrip and Martin Truex Jr.; three Richard Petty Motorsports Fords driven by Marcos Ambrose and Aric Almirola, as well as the Earnhardt Ganassi Racing Chevrolet of Jamie McMurray, Trevor Bayne’s Wood Brothers Racing Ford and the Germain Racing Ford of Casey Mears.
All were all apprehended with roof flap spacers that had been illegally machined in an effort to reduce weight.  Roof flaps and their associated installation hardware are sold to teams as a kit by a company owned by Roush Fenway Racing majority owner Jack Roush. A number of teams reportedly machined the spacers to reduce their weight and lower their cars’ centers of gravity. They are not believed to have altered the aerodynamic footprint of the cars.
NASCAR spokesman Kerry Tharp said yesterday that inspectors found one team with the altered spacers Thursday, before widening their search throughout the Sprint Cup and Nationwide garages.
"When you find something in one garage, you communicate to the other garage," said Tharp. "We looked into it and this is what we found."
Penalties, if any, are expected to be announced Tuesday.
Posted by Dave Moody at 10:19 AM