Larson To Eldora With Clorox Backing 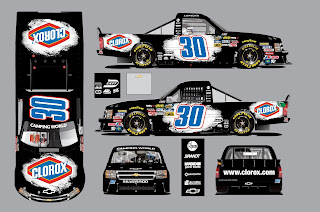 
Larson is no stranger to victory at Eldora Speedway.  The Elk Grove, Calif. native became one of only two drivers ever to sweep the USAC Four Crown Nationals with wins in USAC Midget, Sprint Car and Silver Crown divisions in 2011.  Larson also captured victory in the USAC Midgets at Eldora in 2012.
In his only Camping World Truck start of the 2013 season, he dominated at the legendary Rockingham Speedway, leading 187 of 205 laps en route to his first-ever series victory.  In just five career Truck starts, he has one win, two Top-5 and four Top-10 finishes.
Posted by Dave Moody at 2:07 PM