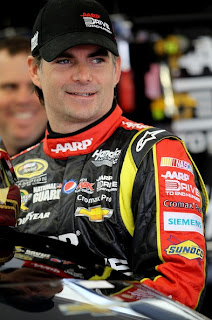 Jeff Gordon said today that despite his 12th-place standing in Sprint Cup Series points and winless season to date, he likes his chances of qualifying for the post-season Chase.

“We have had such an inconsistent year… so many crazy things thrown at us that I am impressed we are 12th," said Gordon. "I'm pretty happy with that. We have so much more potential that if we just live up to (that) potential, there is no doubt we can get in the Top-10."

He said he expects a typically frenzied battle for those Chase spots, especially those involving Wild Card competitors.

“Every year, we see positions eight through 14 or 15 are just crazy; swapping every single weekend,” he said. “So we have to go out there and focus, do our job, do it well and get to the tracks like New Hampshire that are coming up.  We need to get some great finishes and make sure that we do that.”


He said being outside the Top-10 allows him and his team to be more aggressive, claiming, “I would rather be here than eighth.  At eighth, you can be a little too conservative trying to maintain (your spot) in that Top-10. For us, we are so tight among us --.ninth, 10th and further back - we don’t have any choice but to go out there, go hard and be aggressive.”
The four-time Sprint Cup champion said that even under the lights, Daytona International Speedway is likely to be a handful Saturday night.


“Well we know the temperatures are going to be warm,” he said, “so you are going to slip and slide around a little bit more than we did here in February. Other than that, I think we have gotten more laps and experience with this car in the draft (since) the Daytona and Talladega race. I feel we have all gotten more comfortable and are wanting to get more aggressive out there.”
He also said his point position could dictate his level of aggressiveness in the final laps of Saturday night’s race.
“The first thing you have to do is to survive here,” said Gordon. “You have to get to the final laps, which is not an easy thing to do.  We are going to look at where we qualify (and) base our strategy on that, as well as how things went the last time we were here. That is how we are going to run this race.
“We are just going to have to come up with the best strategy that is going to get us a win (or) a good finish.  If we are in the closing laps of the race and have a shot at winning it, then we are going to go for it.
“You have to go for the win. That’s always the case.”
Posted by Dave Moody at 5:58 PM