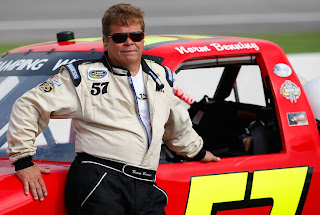 For most fans, the highlight of Wednesday night’s Mudsummer Classic at Eldora Speedway was Austin Dillon’s sterling drive from the middle of the pack to Victory Lane. For many of those inside the sport, however, the high-water mark of the evening came when independent campaigner Norm Benning won a door-slamming duel with Clay Greenfield to claim the final starting position in the main event, with a fifth-place finish in the Last Chance Qualifying race.


Benning’s underfunded No. 57 Chevrolet qualified only 27th in the 35-truck time trial field and failed to transfer in his eight-lap heat race. The 61-year old Pennsylvania native started seventh in the 15-lap “do or die” dash, and quickly surged forward into the fifth and final qualified position. He sat on that hot seat throughout the event, staying just ahead of a snarling, four-truck pack of challengers intent on stealing his transfer spot.
Clay Greenfield made a pair of banzai-charges in the final two laps, diving under Benning and making heavy, door-to-door contact each time. Greenfield and Benning emerged side-by-side from the final turn, bouncing off each other (and the concrete wall) in a wide-open sprint to the finish. Benning prevailed by approximately three feet, triggering a roar from Eldora’s capacity crowd of 18,000 fans and a torrent of high-fives from the crewmembers and drivers who lined the legendary track’s front straightaway.
Unfortunately for Benning, the celebration was short-lived. The left side of his Silverado was badly battered, with exhaust pipes torn from their mounts and dragging on the ground. Almost before he could climb from his truck, crewmen from Richard Childress Racing, Turner-Scott Motorsports, Ken Schrader Racing and numerous other operations swarmed over it, pounding out fenders, changing tires and repairing the broken exhaust.
“I couldn’t get to my own truck through all the people working on it,” recalled Benning today. “I want to personally thank each and every one of them. There were so many, I can’t remember them all.  But I really appreciate what they did.
“I don’t get an opportunity to have a level playing field too often,” said Benning, who began his racing career on dirt at age 15, two years before he was legally allowed to do so. “It wasn’t about aerodynamics at Eldora and it wasn’t about big horsepower. I’d love an opportunity to come out and do it right every week, but I just don’t have the money.
“I’m not sure what we’re going to do for Pocono,” he said. “The only piece on that truck that’s not wrecked is the roof. The right-front frame rail is bent, everything’s torn up. But at least for one night, I felt like a superstar. People were happy I made the race, and it’s nice to have that respect.”