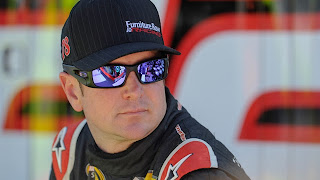 Kurt Busch said today that despite his new status as a Top-10 driver, his weekends at the race track will continue to be “business as usual.


“To be in the Top-10 is great,” said the former NASCAR Sprint Cup Series driver. “It’s a nice feather in the cap, but there is still a long way to go. You can lose points real easily, but it’s tough to gain the points. So basically from eighth to 18th everybody fits in one shoe box right now.”
He said that with multiple position changes each week, everyone knows the battle for a spot in the 2014 Chase will go right down to the wire.
“One pit stop or strategy (call) can put you ahead, or get you behind,” he said. “Right now, the Top-5 guys each week at the track, when they finish Top-5 it’s because they had a fast car. The Top-5 separate themselves, (and) everybody else is in this big wad because the competition is so even across the board. It doesn’t matter what manufacturer you have. It doesn’t matter what team you have.”
Despite being an aggressive driver by nature, Busch said he has had to learn the value of patience and restraint. “We’ve seen what we can do the wrong way with being too aggressive,” said the Furniture Row Racing driver. “We don’t need to get back to the basics, we just need to work on the fundamentals and we’ve been able to do that over the last five or six weeks. When you do that, it starts to erase the bad races we had earlier in the year.
“We’ve made enough mistakes to learn from,” he said. “When you do it early enough in the year, it helps so that when you get things rolling, you feel that experience of what it is like. If you try to overthink it, or try to make sure you hit your marks exactly instead of letting it happen second-nature, then it doesn’t flow as smoothly.
“It’s good that we’ve gotten a lot of tough situation out of the way. Now, we need to enjoy these good moments and just keep it rolling."
Busch said continuing to log consistent finishes will allow him and his FRR team to decide their own fate as the regular season winds to a close.
“You want to control your own destiny,” he said. “You want to go into Richmond and have (to finish) 20th or better. Yu don’t have to win, but you have to stay away from those bad finishes. If you have nice, consistent runs, you control your own destiny going to Richmond.”
He said making the 2014 Chase would be “a huge accomplishment for a single car organization,” and would also be gratifying for him as a driver. 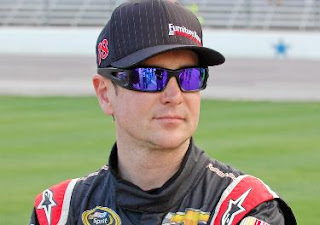 “For me, (it would be) great to be back in the Chase with the fraternity of guys I’m accustomed to hanging out with over the years. (Crew chief) Todd Berrier tells everybody that once we make the Chase, we’re `championship eligible.’ Making the Chase is just the top 12 guys and when you go into Chicago, you have a shot at the championship.
“That week will be that transition week, but we have to get to that point first. We have to be patient and we have to do our homework. We have to show up and study hard for these next eight weeks.”
While there is pressure associated with running for a Sprint Cup championship, Busch said it’s a different kind of pressure than he has experienced before.
“When you are with a program like Penske where you have to perform, everything is an A+. Everything is top-notch and top standard, and if you finish 11th in points two years in a row, that’s not where you want to be. This has… the blue sky factor of building this team up.
“This is much more gratifying.”
Busch played coy when asked if his 2013 success increases the odds of him returning to the team next season. “It has that chance,” he said. “But if I accomplish something and check that off the (list), what’s next?”
He admitted that while working hard to make the Chase in his current ride, he is also examining his options for 2014.
“Contract negotiations… are in discussion, but you try not to let that weigh any of what’s going on right now,” he said. “Right now is the most important thing; living in the present. There are a lot of irons in the fire. It’s good to run well. Being in the Top-10 in points is an accomplishment.
“Now we’ve got to close the door behind us and make sure we are part of the group that is in (the Chase).”