Harvick Says Despite 2014 Announcement, "We’re Going To Go Out And Race Every Week" 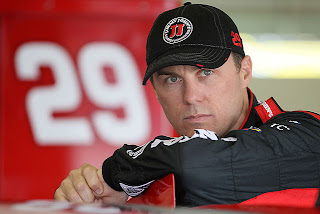 Kevin Harvick said today that while he looks forward to driving the new, No. 4 Budweiser Chevrolet next season, he remains fully focused on winning races (and a championship) as a lame duck driver at Richard Childress Racing.


“It’s nice to officially end all the speculation,” said Harvick today in Loudon, NH. “Obviously, we’ve had three years with Budweiser and are looking forward to moving forward with them as a sponsor.  It’s been an interesting process,” he said, adding, “We really haven’t been involved in much of anything on the sponsorship side of it. We didn’t want to be involved in it. We wanted to make sure we finished our role at RCR on a positive note. I haven’t even met any of the guys at SHR.”
Harvick revealed that SHR owners Tony Stewart and Gene Haas signed him to a multi-year contract without having a major sponsor in place, and had a vested interest in him continuing to run well while playing out the string at Richard Childress Racing.
“(We) didn’t have one dollar of sponsorship when I signed the contract,” revealed Harvick. “(Stewart Haas said), `If we don’t have sponsorship, the car will be on the race track and will be funded.’ There’s something to be said about having that guarantee. (I wanted) to do a good job this year and it was important for both sides to have the 29 car be competitive, win races and do the things that we’ve been able to do this year.
“It was just part of the deal.” 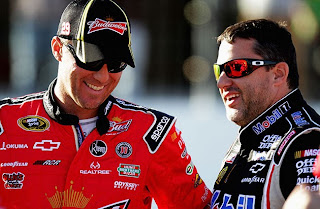 Harvick said he has “no idea” whether any of his other RCR sponsors will join Budweiser in their move to SHR. “One of the intriguing parts of the whole thing is the fact that (I) don’t have to worry about that part of it.  You cannot worry about chasing it,” he said. “You can drive the car, spend time with your family and hopefully, they get it all worked out.”
He also said part of the allure of Stewart Haas Racing is having longtime friend (and multi-time Sprint Cup Series champion) Tony Stewart as a teammate and boss.
“Tony (was) a big part of what we did at KHI to get it started,” he revealed. “We have a friendship that goes beyond the race track and Gene Haas made it very intriguing with the guarantees he made to… put the car on the race track. When you have a family and you start seeing those guarantees of sponsorship for the car, it makes you think about things.
“Not only those two pieces, but the Hendrick (Motorsports) tie with engines and the support; the potential is really high with all those resources and relationships and things that go with it.”
Harvick said today’s announcement was timed to end the steady stream of speculation regarding his move to SHR that first made headlines in January of this year. 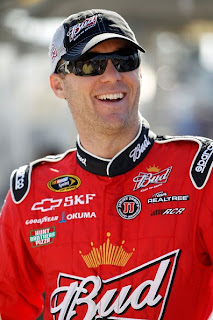 “Hopefully, the timing kind of eases it for both sides to go about their business as the Chase gets here,” he said. He admitted that leaving Richard Childress Racing – the only team he has ever driven for in NASCAR Sprint Cup Series competition – was difficult, even before Budweiser decided to join him.
“Richard (Childress) and I talked about how we wanted to approach it at the end of the year from a sponsorship standpoint,” he said.
“It’s going to have taken almost three years by the time we roll off at Daytona  (in 2014) to have everything transitioned into the business model; whether it be from the racing side or from the KHI side.  There have been a lot of talks, a lot of plans and a lot of things that have had to take place as we’ve tried to make our businesses what they need to be going forward.
“There has been a lot of thought and a lot of things that go into it to make all this happen.”
He said he and his RCR teammates made the most of a difficult situation by sharing a steadfast determination to make their final season together a winning season.
“Everybody has latched onto the message that we’re going to go out and race every week, as hard as we can,” he said. “I was sitting in a competition meeting for the Chase on Wednesday morning, so it’s not like we’ve detached ourselves from what we’re doing and those guys. They don’t care about the politics of the sport, they just want to win races.  They like spraying beer in Victory Lane and as a group, we’re going to do that until we get to Homestead. We’ll start working on the future plans when that race is over.”
Having carried the Budweiser colors for the last three seasons, Harvick said he knows how fortunate he is to have “The King Of Beers” on his quarter panels going forward.
“It’s obviously a great brand and to be a part of,” he said. “The brand has been a lot of fun.  Not only do they sell beer, but they activate (their sponsorship) like nobody else, and to be a part of that is not only good for your brand, but it’s good for everybody who’s involved in it.”
Posted by Dave Moody at 4:20 PM