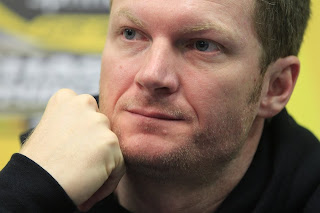 After watching Wednesday night’s inaugural Mudsummer Classic from Eldora Speedway – or at least most of it – Dale Earnhardt, Jr. said today that he would like to see similar events for the NASCAR Nationwide or Sprint Cup Series.


“It looked like that was a lot of fun,” said Earnhardt, who owns a three-car Nationwide Series team. “I had it recorded on my TV and it only recorded an hour and a half of it, so I didn’t get to see the last segment. That was disappointing, to say the least, because I had pretty much cut off all contact with anyone who might ruin the outcome for me.
“I thought that was extraordinary for the race track, the series (and) the sport,” said Earnhardt. “What a risky and gutsy call to go do that. I thought it was just extraordinary that NASCAR was willing to make the leap and then Tony (Stewart) was there at the right place and the right time with a perfect race track and an historic place to run it.
“It’s awesome that it all came together so well,” he said. “I thought the race was fun to watch. I really enjoyed what I saw. I think it would be fun to go run there if they ever did a (Sprint Cup) exhibition or something. I don’t know about a full-on event, but, yeah, maybe we’ll end up doing that one day.”
Earnhardt called  the Camping World Truck Series “a neat choice (for dirt racing) because of the side force they create with the way the bodies are on the Trucks. I’m not sure how the Nationwide cars or Cup cars would run there. But I think it would be fun for the series to have a couple of dirt races, to be honest.
“Eldora is the perfect place to have this all tested out and obviously it seems to be really awesome for the fans and something they really enjoyed, so I expect that it’s something we could see more of. We’ll just have to see what NASCAR wants to do.”
Posted by Dave Moody at 2:12 PM