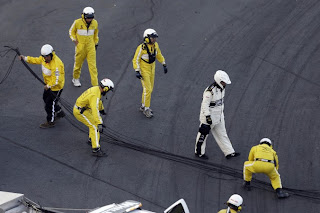 NASCAR will continue its ban on the type of overhead camera system that failed during the Coca-Cola 600 at Charlotte Motor Speedway in May.


A handful of fans suffered minor abrasions and several race cars were damaged when a drive rope used to propel FOX Sports’ overhead CamCat system snapped during the running of the Coca-Cola 600, and NASCAR suspended authorization to use the camera pending an investigation. That investigation is still not complete, and a written statement from the sanctioning body today said, “the safety of our competitors and our fans remains NASCAR’s number one priority, and until total evaluation and analysis have been completed, usage of this particular technology enhancement and any similar enhancements, has been suspended.”
ESPN/ABC – which begins its portion of the Sprint Cup Series broadcast schedule next weekend at Indianapolis Motor Speedway and which uses a different overheard camera system than FOX – released its own statement, accepting NASCAR’s continuation of the ban.
“We have an excellent working relationship with NASCAR and totally understand their position,” said Rich Feinberg, ESPN vice president of motorsports production. “We look forward to beginning our NASCAR Sprint Cup schedule at Indianapolis and televising 17 great weeks of racing.”
Posted by Dave Moody at 3:52 PM