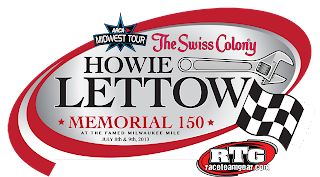 Jerick Johnson and the KOMA Unwind Chevrolet hit the road next week with a retro look, to take part in one of the most prestigious Super Late Model events in the country; the ARCA Midwest Tour Swiss Colony Howie Lettow Memorial 150, next Monday and Tuesday at Wisconsin’s famed Milwaukee Mile.


To celebrate the July 4 Independence Day holiday, the Godfather Motorsports Chevrolet will be re-numbered 76 for this event, honoring Johnson’s longstanding relationship with the POW*MIA Awareness Campaign. “The number is abbreviated from 1776, the birthdate of our nation,” said Johnson. “I’ve had a lot of success with that number over the years, and I’m happy to have it back on my door next week at the Milwaukee Mile.”

Tuesday’s $10,000 to win main event may be the most star-studded short track race in recent history. Included on the 80-car entry list are no less than five NASCAR Sprint Cup Series stars; Matt Kenseth, Kyle Busch, David Stremme, David Ragan and Joe Nemechek, along with Nationwide Series veteran Kenny Wallace and Camping World Truck Series championship contender Johnny Sauter.
“The Howie Lettow Memorial is a race every Super Late Model driver dreams of winning,” said Johnson “With more than 80 of the top Late Model drivers and teams from around the country attempting to qualify, just making the race is a huge achievement. We’re looking forward to taking on the best of the best, and carrying the KOMA Unwind colors to the front of the pack.”
Monday is a practice day for the ARCA Midwest Series Super Late Model teams, with time trial qualifying set for Tuesday at high noon local time, with last-chance heat races to follow at 2 pm. Howie Lettow Memorial 150 driver introductions begin at 5:45, followed by a special performance by the 484th Army Reserve Band. The traditional “Gentlemen, start your engines” command is set for 6:25 pm.
Updates on practice, qualifying and the race can be found on Twitter at #ARCAfest.
About Godfather Motorsports – Godfather Motorsports is owned by Motor Racing Network and Sirius XM NASCAR Radio personality Dave Moody and enjoys major sponsorship from Bebida Beverage Company’s KOMA Unwind "Liquid Relaxation" drink. The team also boasts a comprehensive list of technological and marketing partners that includes Valvoline Motor Oil, Eibach Springs, ASM Graphics, Race 101, CV Products, ARBodies and Phantom Racing Gear. For additional information on the team and marketing opportunities with Godfather Motorsports, contact Dave Moody -- mrnturn1@hotmail.com. Visit the Godfather Motorsports website at www.GodfatherMotorsports.com.


About POW*MIA Awareness – Godfather Motorsports is proud to support the POW*MIA Awareness Campaign. Driver Jerick Johnson has long been an advocate for veterans’ rights and the United States military. He is a five-time Distinguished Guest of the American Legion National Convention and has earned numerous awards from other veterans’ organizations. Promoting and increasing public awareness of the POW*MIA issue has become his main goal. `Prisoner Of War: Missing in Action’ refers to any soldier taken prisoner by the opposing side during an action of war. It is not always known whether that solider is alive or dead, only that they are missing. Our goal is to remind our fellow Americans that the greatest tragedy of all is to be forgotten, and honor those who have given so much. Jerick thanks Godfather Motorsports for the opportunity to help increase awareness of this issue by carrying the POW*MIA logo on the No. 30 KOMA Unwind Chevrolet.