Busch: "I Got Burned By My Own Fire."

Kyle Busch said everything right Friday at Phoenix International Raceway, but it is his actions in the coming months that will determine his fate. 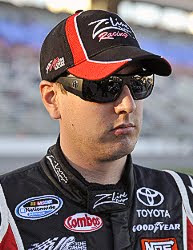 Wearing a Joe Gibbs Racing shirt devoid of sponsor logos, a contrite Busch shouldered the blame for the Camping World Truck Series crash at Texas Motor Speedway last week that saw him intentionally turn championship contender Ron Hornaday, Jr., into the outside wall under caution. The move prompted NASCAR to park Busch from the weekend’s Nationwide and Sprint Cup Series events, and triggered a series of events that left Busch’s very future with the team in doubt.

He will drive in Sunday’s race in Phoenix, but with the Interstate Battery colors on his #18 Toyota instead of his customary yellow M&MS livery. The candy maker announced yesterday that it will withdraw as Busch’s sponsor for the final two races of this season, with plans to return in 2012. In addition to sanctions imposed by NASCAR – including a $50,000 fine, probation through the end of the year and a promise to suspend him indefinitely for any further missteps – Busch will also face what team owner Joe Gibbs called “substantial” financial penalties from the team. While declining to speak specifically on the amount of the fines, Gibbs said the #18 team’s drop from seventh to 11th in points last week “was a big deal” financially.

Busch, meanwhile, said he regrets the turmoil created by his actions and has no one to blame but himself. “I understand my actions last weekend were uncalled for,” he said. “They were disrespectful. “(I have) no one to blame but myself, (and) I apologize to everybody involved in this whole ordeal.” 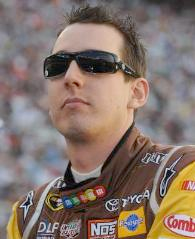 He said he was not surprised by NASCAR’s crackdown, saying, “I felt like it was a decision that they needed to make. I respect that decision and I (accept) the consequences and the repercussions of that. We’re still dealing with them today and we’ll still be dealing with them for a while.”

Busch said he feared Friday’s incident would ultimately cost him his job. “Was there a point at which I thought, ‘Do I have a ride?’” said Busch. “Of course there was. I thought that (I might be fired).“ He revealed that Gibbs never questioned his status with the team, adding, “Joe has been there, stuck by my side and held my arm through this whole deal. I want to be with Joe Gibbs Racing,” said Busch. “I want to be in NASCAR, I want to race the M&M’s Toyota.”

Busch understands that he lost the respect of many in the garage area last Friday night, and can only regain the trust of his fellow competitors by dealing with adversity in a more positive manner going forward. “You’ve got to be smarter,” he said. “I certainly was not smart in my actions Friday night, and I get that. For me, the decision needs to be different come next time around, in the heat of the moment. I’m here to make sure that I can continue on in a positive manner and make it to where everyone believes in me from this week forward.

“Sometimes -- when you’re that close to fire -- are you just going to stay warm, or are you going to get burned by it?” he asked.

“This week, I definitely got burned by my own fire.”
Posted by Dave Moody at 2:40 PM