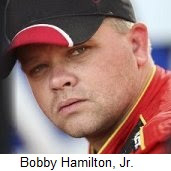 City officials are seeking a new promoter for the legendary Nashville Fairgrounds Speedway, after 2011 leaseholder Bobby Hamilton, Jr., was determined to be in breach of contract.

WTVF-TV in Nashville reported recently that Hamilton’s last three checks to the Metro Board of Fair Commissioners bounced, after a difficult first season where he struggled to attract both cars and fans. He recently cancelled the track’s showcase event, the All-American 400, after being unable to negotiate a mutually agreeable financial arrangement with the sanctioning body for the event, CRA Super Series.
Hamilton’s contract to promote the city owned speedway expired at the end of October, and State Fair Director Buck Dozier said the board is looking for a new promoter to operate the track in 2012.

A group of investors headed by former NASCAR Sprint Cup Series driver Sterling Marlin has expressed interested in acquiring the lease. Marlin won three championships at the legendary oval in the 1980s and his father, the late Clifton “Coo Coo” Marlin was a four-time titlist there in the 1960s. Both drivers used the track as a springboard to what is now the NASCAR Sprint Cup Series, and Sterling Marlin said recently that he would like to take over the track "if everything can be worked out."

The Fair Board has asked for potential 2012 promoters to present proposals at a meeting December 6, with a decision expected by the end of the month. Hamilton will reportedly continue to own and operate Highland Rim Speedway, a quarter-mile short track 20 miles north of Nashville.
Posted by Dave Moody at 10:32 AM