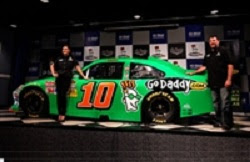 “My favorite number has always been No. 10,” said Patrick. “This is the first time in my professional career that I’ve ever been able to choose my own number.”

Patrick’s 2012 Sprint Cup schedule will begin as expected at the season-opening Daytona 500, before continuing at Darlington Raceway on May 12. Patrick will devote her attention to the Nationwide schedule through most of the summer, before returning to the Sprint Cup Series for the annual night race at Bristol Motor Speedway on August 25. Patrick will also run late-season Sprint Cup races at Atlanta, Chicagoland, Dover, Texas and Phoenix; for a total of eight starts. Two additional races remain to be announced, leaving room for the team to “call an audible” (Stewart’s words), and add races at tracks where Patrick needs additional work.

Surprisingly, the Brickyard 400 at Indianapolis Motor Speedway is not on Patrick’s 2012 schedule. The former IndyCar Series regular pointed out that she will run the Brickyard in the Nationwide Series next season, with Stewart re-stating that the emphasis will be on tracks where Patrick has less experience. “It isn’t that we didn’t want to take her there,” he said. “We chose races we thought were going to be really challenging for her.”

Patrick said the back-loaded schedule will allow her to focus on her primary ride with JR Motorsports on the NASCAR Nationwide Series, and “leave us time to go testing, which we haven’t done yet.” She stressed that her goal remains to run full-time in the Sprint Cup Series in 2013.

No crew chief was announced for Patrick’s 2012 Sprint Cup Series campaign, with Stewart saying the team is “in that process right now… trying to find the right fit.” He said SHR continues to search for sponsorship to run the #10 Chevrolet in additional events with another driver, when Patrick is not scheduled to compete.
Posted by Dave Moody at 4:16 PM