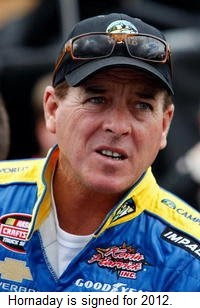 "We are proud to have a champion like Ron Hornaday joining our team," said team owner Joe Denette. "It's not every day that a young organization gets the opportunity to bring a veteran driver like Hornaday on board. He will bring a lot of experience and an entirely new dimension to our team. We are dedicated to winning races and contending for a championship in 2012, and we think our decision to bring Hornaday and Jeff Hensley to JDM shows that commitment."

"I'm very excited for the opportunity to work with JDM next season," said Hornaday. "This is a young team and they have put a lot of the right people in place to win races and compete for a championship in 2012. I'm honored to continue my relationship with Chevrolet and I'm looking forward to a successful 2012 season."

A sponsorship announcement for Hornaday and the No. 9 JDM entry is expected in the coming weeks. JDM also plans to run a second entry in 2012 for selected events.
Posted by Dave Moody at 2:12 PM