Richard Childress Racing will field a black No. 3 Chevrolet on the NASCAR Nationwide Series next season; a car that will tug at the heartstrings of many veteran NASCAR fans. 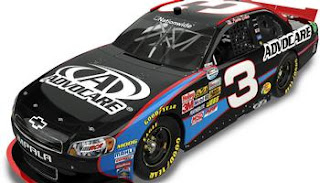 RCR will field the No. 3 AdvoCare Chevrolet for current NASCAR Camping World Truck Series championship leader Austin Dillon in 20 Nationwide races next season; featuring a graphics package that is in many ways identical to that of the late, great Dale Earnhardt. Dillon's car is primarily black -- like Earnhardt's legendary Goodwrench Chevrolet -- and carries a virtually identical slanted #3.

Some fans feel strongly that NASCAR should have retired Earnhardt's #3 following his death in the 2001 Daytona 500. The sanctioning body does not retire numbers, however, creating at least the possibility that the number could be used again one day in the NASCAR Sprint Cup Series.

There are probably only two people who could return Earnhardt's #3 to the race track without invoking the wrath of NASCAR Nation; Dale Earnhardt, Jr. and Richard Childress. Earnhardt actually did so last season, driving a retro-themed #3 Wrangler Chevrolet to Victory Lane in NASCAR Nationwide Series competition at Daytona International Speedway. In Victory Lane, he announced that he would never again drive a car emblazoned with his father's former number, and there has been no change of heart since then.

Childress, however, has campaigned the legendary #3 for a number of years since Earnhardt's death, emblazoning it on the quarter panels of grandson Austin Dillon's dirt Late Models, and more recently on his Camping World Truck Series entries. Now, Dillon will carry the number to the Nationwide Series in 2012, hopefully with the blessing of NASCAR Nation.

Dale Earnhardt, Jr. has repeatedly said he has no issue with someone driving his father’s #3 in the NASCAR Sprint Cup Series one day. “The #3 meant a lot to Daddy and… to a lot of race fans,” he said, “but there's some kid growing up that was never a Dale Earnhardt fan that drives the #3 and might want to be #3 all his life. To not give him that opportunity just ain't fair."

Bottom Line? The #3 did not make the late Dale Earnhardt who he was. In fact, just the opposite is true. Earnhardt made the #3.

NASCAR pioneers Joe Littlejohn, Herschel McGriff, Dick Rathmann, Paul Goldsmith, Tim Flock, Cotton Owens, Fireball Roberts, David Pearson, Lee Roy Yarbrough, Charlie Glotzback and Buck and Buddy Baker (among others) all spent considerable time behind the wheel of #3 entries in what is now the NASCAR Sprint Cup Series. Junior Johnson authored a Hall Of Fame driving career with #3 on his door, and Childress himself used it throughout his 12-year driving career. Ricky Rudd steered Childress’ #3 Chevrolet between Earnhardt’s two driving stints with RCR, proving beyond all doubt that the #3 had its own claim to fame, long before “The Intimidator” came along.

Earnhardt did most of his early racing in cars with his father’s traditional #8 on the doors, before winning the first of his seven Cup championships in -– gasp –- a #2 Wrangler-backed Chevrolet owned by Rod Osterlund.

The facts don’t lie. Dale Earnhardt was a champion with or without the #3 on his door. The #3 won championships with and without Earnhardt at the wheel. Numbers are nothing more than symbols; a splotch of paint (or these days, a hunk of vinyl) on the door of a race car. They have no more to do with success or failure than the color of the car, and nobody’s upset about drivers campaigning black race cars.

Numbers are not heroes. The men who drive them are.
Posted by Dave Moody at 10:23 AM