TRG Motorsports announced today that it has "temporarily scaled back" on payroll while continuing to search for sponsorship for the 2012 NASCAR Sprint Cup Series season. 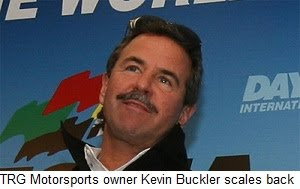 An undisclosed number of employees have been laid off, though many or all of the effected crew members could be hired back next season. Team owner Kevin Buckler commented on the moves, saying, "I'm sad to announce the layoffs," but reiterated that the team's business model has always been lean and efficient, allowing TRG to have competitive advantages in difficult economic times.

"These seasonal layoffs are unfortunately necessary with the present economic environment," said Buckler. "We have kept our core shop, key business leaders, and administrative staff in place, and have actually enhanced our Sales and Marketing side; all in an effort to come back efficient, strong and funded in 2012. With many of the teams in front of us (in points) downsizing or closing all together, we are hoping that we could gain a position and re-take a spot in the Top 35, which would be fantastic."

He said the team will also be "enhancing their competition side with additional talent, in light of current layoffs at (other) major race teams." Buckler said TRG is keeping its options open with "several winning drivers" looking to secure a competitive seat for the upcoming 2012 Sprint Cup season.
Posted by Dave Moody at 2:05 PM